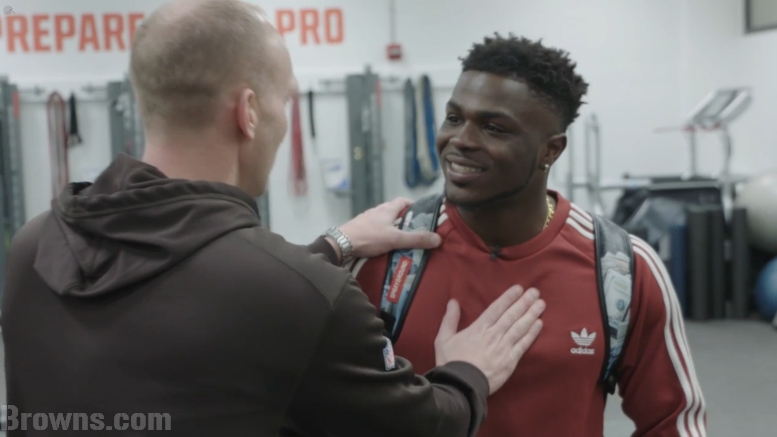 The Cleveland Browns did not select him in the first round of the 2017 NFL Draft simply in order to fill that role, but coaches have been making comparisons between safety Jabrill Peppers with Josh Cribbs, the greatest returner in team history, and among the best of this century.

Peppers, the Michigan do-everything player who played virtually every position in college, is working on transitioning to a full-time starting safety at the NFL level, but his coaches have already been talking about how to get him involved in other aspects of the game, including in the return game, and even some touches on offense.

While they may have drafted him when they did in order to play safety, however, they knew what they were getting as a returner. According to Ohio.com, Browns special teams coach Chris Tabor could hardly contain himself in excitement.

“The way he’s built, he kind of reminds me a little bit in the Cribbsy mold”, Tabor said earlier in the offseason at mandatory minicamp. “He has some thickness to him. If you look at our past returners, even when I was in Chicago with Devin [Hester], Devin was a little slighter guy. Travis [Benjamin] was a really slight guy”.

But Peppers he finds to be “a mix of more of a Cribbsy and [the slighter returners who] can go north-south. But I thought he had good vision coming out, and you could see it on a lot of plays where he could just create on his own, and I think those are good traits in a returner”.

Over the course of his 10-year career, the first eight of which he spent in Cleveland, Cribbs primarily made his mark on special teams as a returner. He averaged 11 receptions and not many more rushes per season, in order to illustrate that point. But that wasn’t why he was on the roster.

It was for his return ability, on both kickoffs and punts. He returned 426 kicks over the course of his career for 11,113 yards, averaging 26.1 yards per return. He had just one season averaging below 24 yards, and he averaged 32 yards in 19 returns in his final season with the Colts. He returned eight kickoffs for touchdowns, though all of them came in his first five seasons.

Cribbs also recorded 222 punt returns, gaining 2375 yards for a healthy 10.7-yard average. That includes a dip down to 6.6 yards on 19 returns in his final season. He also returned three of those punts for touchdowns, for a combined 11 return touchdowns in his career.

If Peppers can come anywhere close to duplicating that sort of production that Cribbs was able to turn in over the course of his career, then the Browns will have found themselves a starter at multiple positions. Much to the chagrin of the Steelers fans who wanted him.