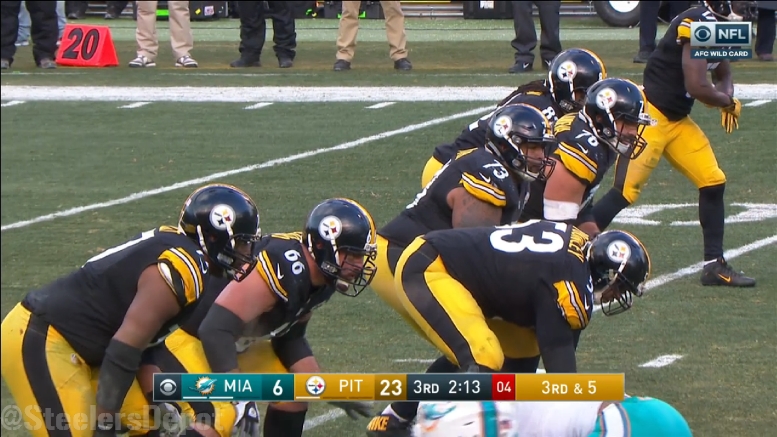 I don’t want to sound hot take-ish to kick off your week but seriously guys, I think this group of Pittsburgh Steelers are in contention.

We’ve all discussed how good this current line is: Alejandro Villanueva, Ramon Foster, Maurkice Pouncey, David DeCastro, and Marcus Gilbert. The upgrade it is over the mid-2000’s and early decade units that were average at best, awful at its worst.

But their historical impact? Less talked about.

Because it’s not like the Steelers are known for great offensive lines. Wide receivers? Yes. Defensive lines? You bet. But the starting five? Not really. Right off the bat, it jumps this current group into the conversation.

For my money, Pouncey is a top two center in the league. Dallas’ Travis Frederick is the only name you can argue with and he does have a valid case. DeCastro is a top ten guard, Gilbert a top ten tackle, while Foster is better than often given credit for and Villanueva is an emerging left tackle.

So who is this group working against? I wasn’t around for all of these units so maybe I’m not the right man for the job, but here’s their best competition. School me in the comments below if you’d take any of those groups, relative to their era of course, over what the Steelers currently have. Or any I am leaving off.

The Super Bowl winning bunch. Faneca is a soon-to-be Hall of Fame guard, leading this list. When healthy, Smith was an excellent left tackle and Hartings a great center. Starks was the road grader at right guard for the run-first offense and Simmons is often forgotten about.

That year, the Steelers ranked 5th in the league in rushing yards and touchdowns, though that’s in part to their frequency. No one ran the ball more often. Combined, these five made 12 Pro Bowls with Faneca leading the way, voted to nine. And all five started at least 80 games in a Steelers’ uniform.

Another Super Bowl club though the team fell short to the Dallas Cowboys. It was an older group, three of them were 30 years or older, it was a talented bunch. Jackson’s season was cut short to nine games and rookie Brenden Stai wound up starting nine games, including the Super Bowl (Strzelczyk did not).

The team ranked 5th in rush offense and were sacked 24 times all season long, compared to 42 by opponents. And that was without a clear cut running back. Jackson might be the most underrated linemen in team history and a gem of a draft pick, taken in the 10th round who reeled off 130 starts. Newberry was a Pro Bowl guard in the final season of his career, Dawson needs no introduction, and Searcy was a good right tackle who wound up being duped into going to Jacksonville. Even Stai would go on to start 59 games for the Steelers.

Two 70s era lines make the list. Some “names” across the board. Led by Webster, the Ironman, who was named an All-Pro. Kolb was one of the league’s strongest players and literally appeared in Strongest Man competitions. And Brown was thriving in his move from tight end to right tackle.

Despite the team finishing 12th in carries, they ranked second in rushing yards and touchdown and finishing first with a 4.6 YPC average. Despite nearly 500 attempts, they were sacked as a team 27 times. Impressive stuff across the board. And of course, this unit won a Super Bowl, though Pittsburgh didn’t find much running room that day.

Could go in a lot of directions for the 70s era Steelers. But the first group was one of the best, in name and in performance. Amazingly, they made just one Pro Bowl across their entire careers. That was Van Dyke, elected in ’73. But the others were all worthy. Kolb, Davis, and Mansfield all started over 100 games while Mullins was the “lowest” with 87.

Mansfield was the first great center and Mullins enjoyed success at tackle and guard, becoming their go-to puller to pave the way for Franco Harris and friends.

I chose 1972 for the absurd success the unit had. Credit to Harris of course but ditto for the line. Similar story to 1979. Despite only ranking 11th in carries, the Steelers finished second in rushing yards (1715, an average of 122.5 per game) and touchdowns (22). Terry Bradshaw was sacked 29 times, a pretty good number for a young guy still finding his footing who probably was at fault for several of those.

A Pre-Noll addition for the old-timers. Varrichione is the Steelers’ best offensive linemen before the 1970s, voted to four Pro Bowls in Pittsburgh and another when he ventured out with the Rams. Sandusky earned a Pro Bowl nod that season, playing in 104 career games with the team. Nisby is an underrated guard while James – in his rookie season – would go on to enjoy a strong career.

For a team who finished 5-6-1, the run game was strong. The Steelers ranked in the top ten in yards, touchdowns, and average. Tom Tracy and John Henry Johnson teamed up to rush for just over 1300 yards.