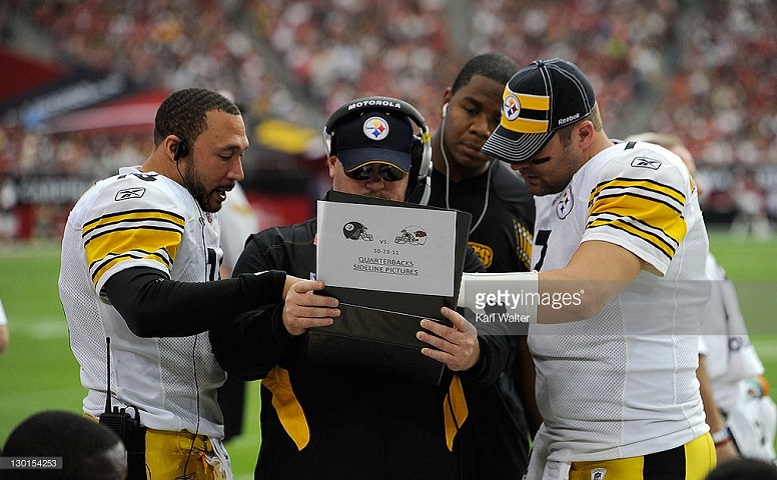 After deciding to retire from the NFL in 2013, former quarterback Byron Leftwich took a few years off before ultimately deciding his life’s work should include him coaching the game he played professionally for 10 years. To really nobody’s surprise, Leftwich landed with the Arizona Cardinals in 2016 as a coaching intern and he began his apprenticeship under head coach Bruce Arians, who coached him several seasons when the two were with the Pittsburgh Steelers.

Leftwich’s 2016 internship must have gone well as Arians hired him to be the team’s new quarterbacks coach this past January. While the former first-round draft pick of the Jacksonville Jaguars probably still has a lot to learn about coaching in the NFL, Arians let it be known recently that he believes the now 37-year-old Marshall product has a bright future ahead of him.

“He’ll be a head coach early and fast,” Arians said recently of Leftwich, according to Darren Urban of azcardinals.com.

While that certainly is some high praise from Arians, one must think that Leftwich is still several years away from potentially being an NFL head coach. Assuming all goes well as the Cardinals new quarterbacks coach, one can easily speculate that Leftwich might become an offensive coordinator in the next few years. From there, his level of success at such a high-profile coaching job will likely determine how soon he’s considered a legitimate head coaching candidate.

Currently, former Steelers offensive line assistant coach Harold Goodwin is the offensive coordinator in Arizona but with that said, it’s not hard to speculate that Arians still has a big hand in the play-calling. Arians, however, has a recent history of health-related issues and thus his coaching career could be coming to an end in the very near future.

For all we know, Leftwich might ultimately decide he wants to be a college head coach down the line, but for now, however, he’s just happy that Arians has given him his first NFL coaching job.

“I played the game as if I was a coach,” Leftwich said. “I never really had the physical ability to run around. I could throw the ball, but I had to think my way through the whole time. I think (Arians) understood that and appreciated my knowledge, how much work I put into the game.”