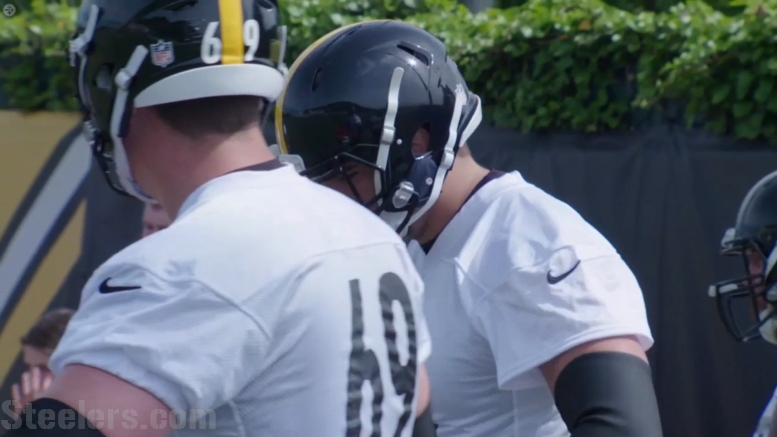 For a player who spent most of the 2016 season on the 53-man roster, Brian Mihalik certainly does not seem to be getting talked about very much, so it is easy to see why his stock is down. But it is not just because of all that. In reality, he should be in the driver’s seat to be the team’s ninth-best offensive lineman.

But it just seems so unlikely at this point that the Steelers are going to carry nine offensive linemen this season now that they have bolstered their depth at wide receiver, cornerback, and outside linebacker. It is more likely than not that they will depend upon the versatility of players like Chris Hubbard to get through the year with eight.

While the Steelers were intrigued by Mihalik as a converted defensive lineman standing at 6’9” to play tackle—remind you of anybody?—he was not a high-priority player, so when he got injured in the preseason opener, he was waived injured.

He later resurfaced last year after recovering from his MCL injury, signing with the Lions’ 53-man roster for two days, and then to their practice squad. The Lions are the team that the Steelers faced in the one game that he played in the preseason.

After Ryan Harris was injured last season, Pittsburgh signed Mihalik off of Detroit’s practice squad onto their 53-man roster, and he remained there for the rest of the season, though he never dressed for a game.

Harris has since retired, but, of course, the team has also gotten back Jerald Hawkins, their fourth-round draft pick last year, who was injured in that same game. The plan is for him to be the top backup tackle this season, with Hubbard likely being the fourth tackle, and a likely game-day inactive, barring injury.

Because Hubbard can play all five positions, as well as tight end, the Steelers can get away with having only eight linemen on the 53-man roster. Mihalik, of course, figures to be a prime candidate to latch onto the practice squad, where he likely would have spent all of last season had it not been for a number of injuries, including his own.