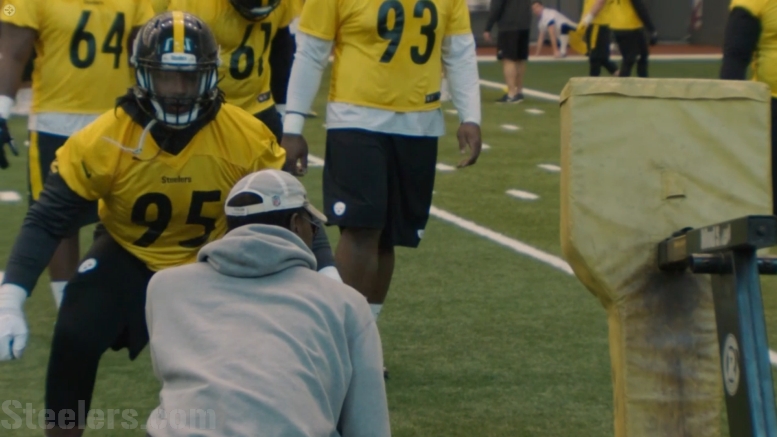 I suppose we might as well stay on theme at this point. After previously discussing the shifting value of L.T. Walton and Daniel McCullers, based off of recent comments and observations from those observing or a part of the team, it would only make sense to discuss the other player involved in that conversation, which would be first-year defensive end Johnny Maxey.

An undrafted free agent last season out of a small school, Maxey spent the majority of the 2016 regular season on the practice squad after he registered six tackles over the course of the preseason with the team. He was promoted to the 53-man roster after Stephon Tuitt suffered an injury in Week 15, and participated in the final two regular season games.

He only registered one tackle in those two games, but he logged 51 snaps, which is a significant chunk of playing time for a rookie who had just been called up from the practice squad, and playing in a hugely crucial game against the Ravens, which ended up determining the winner of the AFC North.

Generally speaking, Maxey played pretty well, though of course he was not without his rookie mistakes. He seems to have added weight since last season, but he was moved a bit too easily out of the hole a few times. I believe there was one significant run in the season finale against the Browns for which he was largely responsible.

Considering where he came from, however, as an undrafted free agent addition out of Mars Hill, the growth that he made over the course of the season was significant, even if his addition to the 53-man roster was entirely attributable to injuries—not only to Tuitt, but also to Cameron Heyward, who was on injured reserve, and to Ricardo Mathews.

Maxey was also active for the Wildcard game against the Dolphins, but only played a single snap with Tuitt returning and logging 57 snaps—which was 88 percent of their defensive snaps, by the way.

So far during OTAs, multiple local writers, among them Bob Labriola, have relayed reports from practice, and presumably from coaches, about the first-year defensive lineman looking promising, the aforementioned writing that he “has a very good chance at a spot on the 53-man roster”, adding that his promise is one of the reasons the team did not draft a lineman.