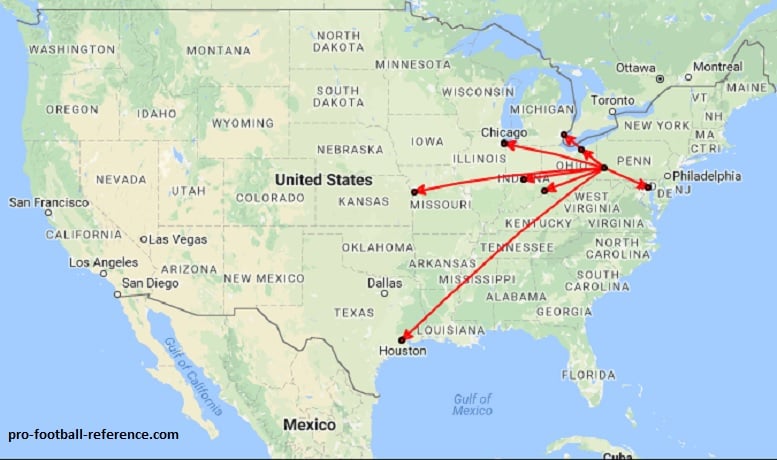 While the 2017 Pittsburgh Steelers may indeed have miles to go before they sleep during their journey to what we all hope ends in a February Super Bowl championship confetti shower in Minneapolis, fortunately a lot of those miles won’t be spent in the air on a plane.

According to a study by Delta Airlines via the Seattle Seahawks official website, the Steelers will travel the least number of miles during the 2017 regular season. The final count is 6,790 air miles, to be exact.

While the NFL rotating scheduling plays a big part in the Steelers lack of 2017 air miles, the fact that the 2016 team finished first in the AFC North resulted in them only needing to travel as far west as Houston during the 2017 regular season.

Had, however, the Oakland Raiders wound up beating the Denver Broncos during the final week of the 2016 regular season, the Steelers would have had to visit the state of California during the 2017 regular season and most of you know already the history the team has in that state since head coach Mike Tomlin was hired in 2007.

As far as time zones go for the 2017 Steelers, only three of their eight road games will be played outside of EST. Those three games against the Kansas City Chiefs, Chicago Bears and Houston Texans, will be played in CST. The team’s Week 16 game on Christmas day against the Texans will easily be their longest trip of the 2017 regular season and will account for roughly 33% of all miles flown during the regular season.

It’s still unclear as to which airline will charter the Steelers 2017 away flights after their previous provider, American Airlines, announced this past April that they were suspending their deals with six NFL teams, including the Steelers.

When comes to the three other AFC North teams, the Cincinnati Bengals will log the second least amount of air miles in 2017 with an estimated 7,652. The Cleveland Browns will fly an estimated 16,382 miles in 2017 while the Baltimore Ravens will fly 18,452 miles thanks in part to them having to travel to Oakland and Minneapolis as well as London, England.