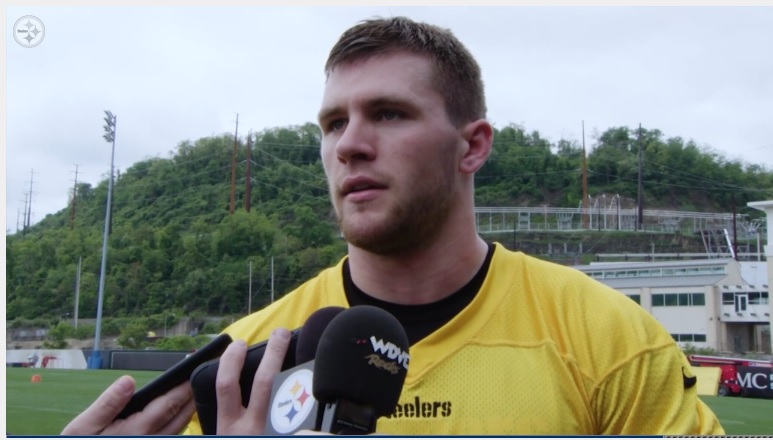 It’s just Day One of his NFL career. But it was a good step forward for T.J. Watt. Per the Trib’s Chris Adamski, Watt began the first day of OTAs running as the first team ROLB, though the caveat is that James Harrison did not participate in team drills.

Watt’s teammates took notice, praising the rookie for how quickly he’s seemed to acclimate himself.

“He’s good,” Bud Dupree told Adamski. “He’s catching on fast. Learning. Communicating well. I feel like he will be OK.”

Ryan Shazier, the QB of the defense and proper evaluator of such things, echoed similar thoughts. OTAs is when rookies begin to feel the speed of the game. So far, so good.

Watt is helped by playing with his hand up at Wisconsin as a more traditional outside linebacker. The Badgers ran a 3-4, like Pittsburgh, and a schematically similar defense. They stunted and twisted as often as Pittsburgh and Watt was asked to drop into coverage, meaning that generally speaking, no concept should be entirely foreign to him. That makes the transition significantly easier than the typical rookie.

Watt is expected to split time with Harrison at ROLB this season. To see him immediately leapfrog veterans like Arthur Moats and Anthony Chickillo – who, granted, didn’t play a ton of ROLB last year but are still capable – is something worth noting when it’s football in shorts.

That’s one way the Steelers’ defense is changing. Long gone are the days of rookies riding the pine. That ended after Stephon Tuitt in 2014 when he was frustratingly kept on the bench for a woeful Cam Thomas.

It’s part of Keith Butler’s philosophy change, simplifying the defense to get rookies on the field quicker and let athletes be athletes instead of thinking too much. Watt is the next man up and on paper, has the ability to make a relative seamless transition. He has the work ethic, the conditioning (his football family has taught him how to train) and the college background to allow him to hit the ground running.

And to hit some quarterbacks.