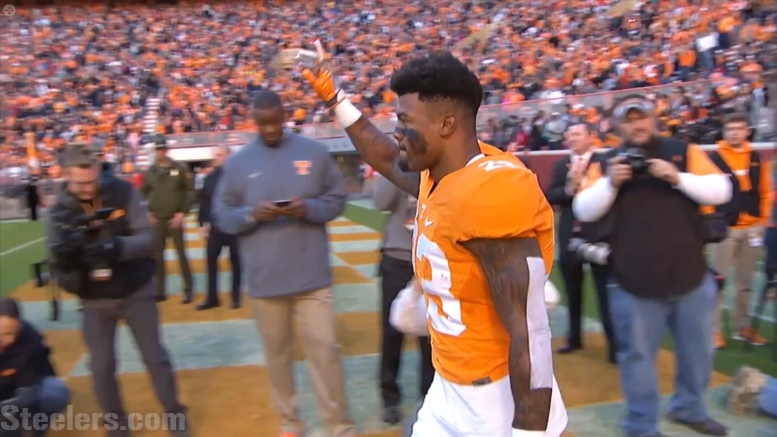 One of the great things about the Pittsburgh Steelers having the opportunity to bring in players to the UPMC Rooney Sports Complex and take them on a tour of the facilities is the fact that they have in their hallway truly the ultimate recruiting tool: a well-polished lineup of silver Lombardi Trophies.

It is a striking image that has the mouth of any football player striving for greatness watering at the opportunity of adding to that legacy, and it doesn’t matter whether that player is coming in for a pre-draft visit or meeting with the team in free agency to possibly sign there. Whether you’ve been around for 10 years or are just starting, the goal is always the same. Hardware.

Steelers third-round draft pick Cameron Sutton may not have been a pre-draft visitor for the team—which team journalist Bob Labriola breathlessly pointed out had very little correlation with the specific players that they drafted this year in a direct shot at bloggers reporting the pre-draft visits—so he didn’t get an opportunity to ogle the trophy case until he actually reported for work for the first time.

Actually, it wasn’t even work. As Teresa Varley noted on the team’s website, Sutton was actually in town very shortly after the draft to participate in a fan event. It was at that time that he first got the opportunity to step inside the facilities and halve a quick look around.

“I was wide-eyed, wide-eyed”, he described his reaction to seeing the shiny tokens of success all in a row behind the glass. “That’s the simplest way you could put it. I’m a guy who’s never been there before, I’ve never been to Pittsburgh, I’ve never been in the city and even in the area, ever in my life”, he said.

He said that it first hit him “when we came through the tunnels”, as the city gradually unfolded before him. And he is not the first draft pick to fall in love with his new city, as Alex Kozora noted the transition to a Pittsburgher that JuJu Smith-Schuster has already undertaken. I don’t think I need to explain James Conner’s connection to the Burgh.

There is a saying that success breeds success, which has been quantified in the world of psychology as the Winner Effect. The Steelers have a storied history of success over the past 50 years, so it’s only natural that those who come in and experience a tangible part of that history, such as an unparalleled trophy case, would want to be a part of extending that tradition.