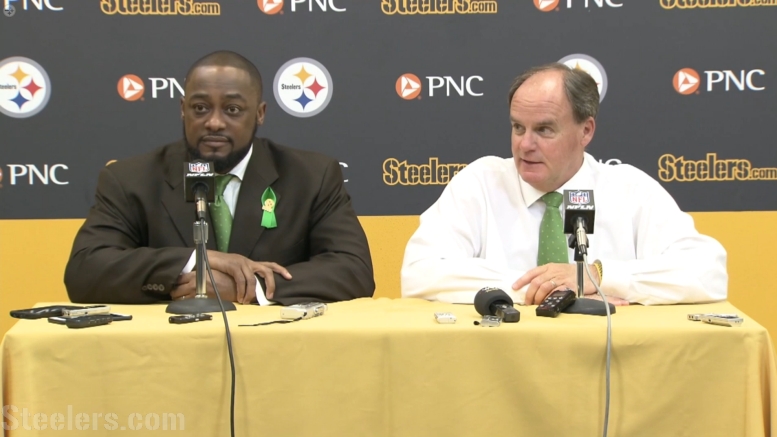 What was really behind the Pittsburgh Steelers somewhat bewildering strategy in the 2017 NFL Draft?

Yes…but at the root, there was something even more radical. More profound. And it wasn’t even mentioned by NFL Draft gurus Mel Kiper Jr. and Mike Mayock.

You see…for all NFL teams, each draft has a general theme and the choices made are as much a statement about the team’s past roster as it is about the future one.

Some might be focused on increasing team speed. The statement they are making is their current squad is slow.

Others might be focused on drafting players who have won at the college level. They are basically saying that..well..their locker room is filled with losers.

Then, of course, there is the Cleveland Browns, where the annual theme is, “Let’s just hit the reset button.”

So what was this year’s draft theme for the Steelers, and what does it reveal about the team’s opinion of the current roster?

The Pittsburgh front office is as tight-lipped as it comes in regards to ripping on their own players. The draft is as close as you’ll get at determining what they truly think about their roster.

So let’s read the tea leaves.

It starts with a first round draft pick in linebacker T.J. Watt, who only had one full year as a starter at college in his resume. Remember when General Manager Kevin Colbert went on and on about how much the franchise values production at the college level above everything else?

Do you recall that Jarvis Jones selection?

Production at the university level? Watt entered college listed as a tight end. Does his production add up to first round pedigree by Colbert’s own standards? Hmmm.

And what about drafting a second round receiver in JuJu Smith-Schuster, who had difficulty getting separation from cornerbacks even at the college level? Welcome to the NFL, young man. Now try to get open against guys who are just as big and strong and who run a 4.3.

And then there is Cameron Sutton, a cornerback who couldn’t break 4.5 at the combine. How can he be counted on to keep up with the elite speed of the big leagues?

Of course, there is everyone’s favorite in James Conner, the inspirational running back from Pittsburgh. The story is phenomenal, but when judging on pure talent who could argue against it being a significant reach at round three?

But…there’s the rub. The Steelers didn’t enter this NFL draft looking for pure talent. They weren’t seeking out players based on their college productivity.

Instead, they were attempting to fill a significant team need. One that was painfully exposed in the AFC Championship against the New England Patriots.

That is, the will to win. An unimpeded focus on the being the best in the world. A total expression of passion and true love of the game.

Let’s be honest. If Ben Roethlisberger and Tom Brady were on the playground picking their team, don’t you think Big Ben would want to choose just about everyone on his offense over those of the Patriots?

And defensively. Was there really that large of a separation of talent between the two squads?

But the Steelers got embarrassed. Humiliated.

Sure you can say they got outcoached. That happens with pretty much every team competing against Bill Belichick. And you wouldn’t be wrong if you said they got out played on that any given Sunday.

Still, what was disturbing and undeniable, was the Patriots were clearly on a mission…and the Steelers, in comparison, were merely along for the ride.

Is that harsh to say the team didn’t have a “will to win”? It is if you’re looking merely at the 60 minutes during which the game is played.

But the will to win begins the day after the Super Bowl winner is decided. It carries through each and every day during the offseason. Do the players and coaches see the six months of the offseason as time off or time to take it to the next level?

Were the Steelers lacking focus and dedication in 2016? Let’s see.

And the most challenging of all? How about your $100 million dollar quarterback spending more time talking about retirement than what he’s going to do in order to win another Lombardi Trophy for the NFL’s most storied franchise and greatest fanbase?

Yes…going into this NFL Draft, the Steelers front office clearly identified the team’s Achilles Heel. This is a team with extraordinary talent, especially on the offensive side of the ball. But they clearly are lacking the “it” factor.

It’s a squad with unlimited potential, but without the commitment it requires to be champions.

That is why, this year’s Steelers draft makes so much sense. In fact, it’s why it’s absolutely brilliant.

T.J. Watt? An unrelenting motor, a family pedigree of football pride, and a desire to be the best in his clan.

Schuster? No, he won’t be the team’s fastest player. But this is an offense that desperately needs a player who is more Hines Ward than Usain Bolt in the huddle, and he’ll fit the bill.

Conner? Probably the wisest choice of all. This is the closest the team has come to drafting Rocky Bleier than…well since Rocky Bleier. This guy will spend less time posting selfies, and more time bringing the Pittsburgh back to the Steelers.

And for those of you who have questioned the Joshua Dobbs selection, take heart. Roethlisberger doesn’t need a harmless, super-nice guy like Landry Jones backing him up. He needs a rocket scientist with limitless ambition to remind him of what an honor and privilege it is to be an NFL quarterback in this league.

“Are you done with that football, sir?”

Before you jump to the conclusion I am some sort of Big Ben hater, it should be said the jersey I wear for game day has the number seven on it. Heck, our family cat is named Ben, and is exactly as old as Roethlisberger’s NFL career.

And sadly, just like our kitty, there is a limited life expectancy on Big Ben’s opportunity to express himself in the NFL.

He’ll have plenty of time to open Roethlisberger Burger franchises in the future, but his time for football immortality is now, with the clock ticking down every precious remaining moment.

As the team’s on-field Chief Executive Officer, it is unfathomable Roethlisberger would make so public his mindset of having one foot on the football field, and the other on a golf course.

How is that being the leader of the team? How is that motivating your teammates to be all-in on the 2017 season?

I love Big Ben. He’s a great all-time Steeler, and I believe he has several more years to lead this team to glory.

But if he mentions the word “retirement” ever again, it ought to be in the office of Art Rooney II with a refund check in his hand for whatever is left on his contract.

If the Steelers are going to bring home any more hardware for Steelers Nation, it’s going to have to be with a much greater commitment than they have demonstrated the last few years. And that includes the entire organization.

Did I like this year’s draft? Absolutely. This team was talented enough long before NFL Commissioner Roger Goodell heard the first raining of boos in Philadelphia.

An infusion of heart is exactly what the team needed. Which is why this year’s draft is championship grade.