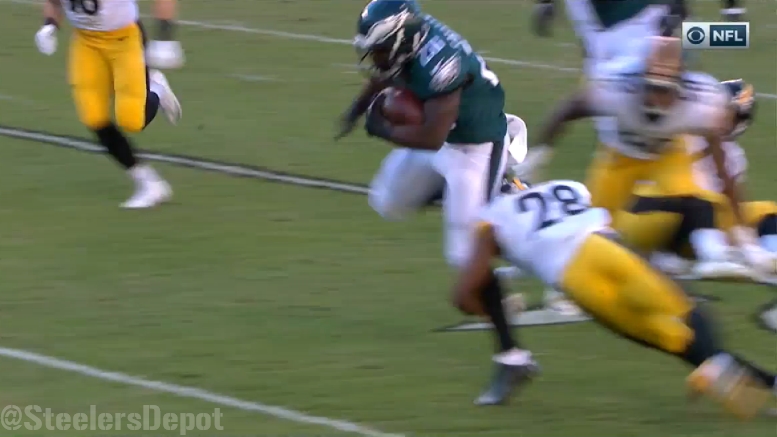 All things considered, Pittsburgh Steelers safety Sean Davis had a great first season in the NFL and it culminated with the Maryland product being voted the team’s rookie of the year by the local media. With that said, the fact that Davis played most of his rookie season with a torn labrum in one of his shoulders is even more impressive.

Davis, who has seemingly been able to participate in the Steelers OTA practices so far this summer on a limited basis, talked openly about last year’s shoulder injury and subsequent offseason surgery with the media following Tuesday’s session.

“I’m just being safe right now,” Davis said of his limited activity so far during practices. “I did have a minor procedure, so I’m just being safe. I mean, I’m capable of doing everything but when I’m ready I’ll be out there with the guys.”

Davis indicated Tuesday that he originally suffered his shoulder injury while making a tackle during the Steelers Week 3 game against the Philadelphia Eagles. That injury resulted in him playing just one defensive snap the following week in the Steelers game against the Kansas City Chiefs.

“I played through it the whole year,” Davis said.

While Davis ultimately took over as a starting safety in Week 11, it makes you wonder if he would have assumed that role earlier in the season had he not injured his shoulder.

Bad shoulder and all, Davis still managed to register 70 total tackles during his rookie season and one of those was a crushing hit on Indianapolis Colts quarterback Scott Tolzien just short of the goal-line on a third down play late in the first half of the team’s Week 12 game to help preserve a 21-7 lead.

“I’m not sure, yet, just playing it by ear,” Davis said. “But the main goal is to be safe, because we don’t want to rush it and have a setback.”

Assuming he can start the 2017 season healthy, Davis believes his second season will be even better than his rookie year.

“That’s the goal is to get healthy and to just get the confidence back in my shoulder and my body,” Davis said. “I made the comment that last year should be the worst that I play, so hopefully I can make some steps forward with healthy shoulders.”