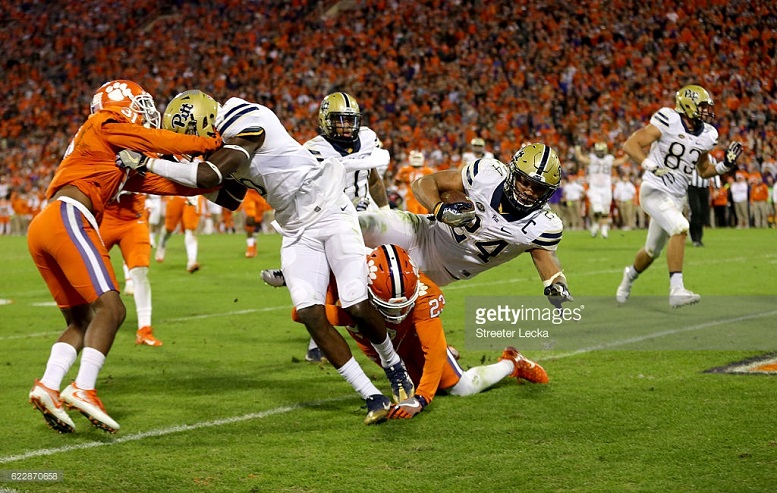 The Pittsburgh Steelers annual rookie minicamp will get underway this weekend and that means running back James Conner, the team’s second of two third-round draft picks this year, will be back on the football field once again doing what he loves best. On Thursday, however, Conner was a guest on the ‘Mike and Mike Show‘ and he was asked if he’s already been told what his initial role will be with the team.

“Coach [Mike] Tomlin and [Kevin] Colbert, they all said they want to see me cover kickoffs and everything,” Conner said. “So, I’m willing to do whatever it takes to help the team win. I want to be a part of something bigger than me. I’m going to come down on kickoffs, return a punt, or return anything.”

Initially, Conner, as he stated, will be asked to make an immediate impact on special teams as he works on learning the Steelers offense and thus gain the trust of the coaching staff. Whether or not he ultimately starts the regular season as the team’s backup to starter Le’Veon Bell is yet to be seen, but with that said, he looks forward to learning from one of the best running backs currently in the league just the same.

“Le’Veon Bell is the best back in the game and so I feel blessed to go there and be able to learn from him, and pick his brain and see what he sees and just learn from him, really,” Conner said. “Whenever he comes out of the game, there will be no drop-off for it. So, he’s earned that role, but I’m going to prepare mentally like I’m the starter and when I get a chance to run the ball and get out there and catch and block, I’ll be just fine.”

While Connner really didn’t have much of a special teams background during his college career at Pittsburgh, Steelers general manager Kevin Colbert has stated several times since the team drafted the running back that he believes he has the demeanor needed to help out in that phase of the game.

While Conner will likely forever be known as a player who battled and beat Hodgkin’s Lymphoma during his college career, he hopes in the future that he’ll also be known as a successful NFL player in addition to being a cancer survivor.

“I understand it’s going to be attached to my name for many years to come, probably forever, but I like to think I’m a pretty good football player and that’s what the Steelers drafted me for,” Conner said Thursday. “Coach Sax [James Saxon] said, ‘It’s not a feel good story, it’s a guy who can be really good at football.’ If the announcer says, ‘Cancer survivor,’ then so be it, but I want to eventually have people, when they hear my name, be known for the good football player that he is.”

You can listen to all of Conner’s interview below and it starts at around the 20:10 mark.