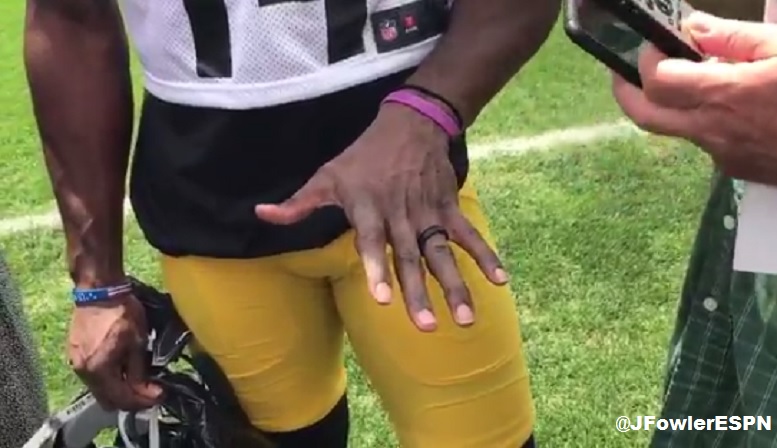 After getting off to a hot start in the first five games of the 2016 regular season, the offensive production of Pittsburgh Steelers wide receiver Sammie Coates pretty much vanished after he suffered a left-hand injury in the teams Week 5 win over the New York Jets.

While Coates was able to continue playing with his busted fingers, his main contributions came on special teams in the next nine games as he only managed to catch two passes for 14 yards after registering 19 receptions for 421 yards and two touchdowns in the first five games of the season.

After it was initially reported this past January by Jeremy Fowler of ESPN.com that Coates had undergone offseason surgery to repair “fractures and tendon damage” to the fingers on his left hand, that ultimately wound up not being the case. Instead, Fowler later reported that Coates underwent sports hernia surgery.

On Tuesday, the first day of the Steelers second week of OTA practices, Coates met with media following practice and per request, he showed his left hand and fingers.

Steelers Sammie Coates opted NOT to have surgery on his broken, crooked finger. Here it is: pic.twitter.com/TSzLfAJGex

“It’s good right now, just getting the strength back and continue being a football player,” Coates said Tuesday of his left hand in a video shot by Fowler.

Coates, the Steelers third-round draft pick out of Auburn in 2015, is far from guaranteed a spot on the 2017 53-man roster at this point of the offseason and especially now that the team recently spent a second-round selection on former USC wide receiver JuJu Smith-Schuster in the 2017 NFL Draft in addition to adding veteran wide receiver Justin Hunter to the position group earlier in the offseason via free agency.

With that said, Coates does have some special teams experience now and if he can show that ability again during the offseason practices and training camp in addition to proving that he can return to being the player he was during the first five weeks of the 2016 regular season, it will improve his chances immensely.

As for what Coates’ fingers look like right now, I’ve seen much worse, so hopefully they’re now in good enough shape so that he can pick up where he left off at as a receiver early last season.

‘You want to see it?’ Steelers WR Sammie Coates shows off the hand with multiple broken fingers that marginalized his production in 2016. pic.twitter.com/SVh3JA9KHF