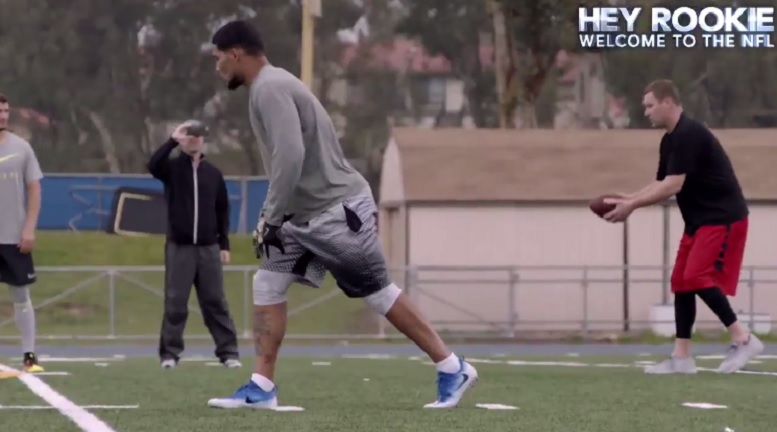 A few weeks ahead of the 2017 NFL Draft taking place it was reported that Pittsburgh Steelers quarterback Ben Roethlisberger was lobbying the team to select a tight end this year. The quarterback wasted no time refuting that report, however, with that said, Roethlisberger reportedly did lobby the team to draft a running back this year and particularly one he was already well-acquainted with.

During a recent interview with Ron Cook of the Pittsburgh Post-Gazette, Roethlisberger admitted he did push the Steelers to draft former University of Pittsburgh running back James Conner.

“I’m not saying I’m the reason we picked him, but I really pushed hard for him,” Roethlisberger said, according to Cook. “I think he’s going to be such a great fit for us. Every player who’s from Pittsburgh or played in Pittsburgh wants to play for the Steelers. I get that. Bruce [Gradkowski] and Charlie [Batch] were that way. But James has a passion to play for us. ‘I only want to go to Pittsburgh,’ he told me before the draft. He’s going to work his butt off. You won’t even recognize him when you see him. He’s got his diet right. He’s lost weight. He’s leaner, stronger and faster. I’m really excited about the energy he’s going to bring to our team.”

In addition to knowing Conner from his college career at Pittsburgh, Roethlisberger was able to spend some time with his newest running back ahead of the draft as the two worked out together in Newport Beach, Calif. Both, by the way, are represented by Rep 1 Sports and agent Ryan Tollner and that’s likely what ultimately led to the two having some training time together.

“Working with Ben Roethlisberger was amazing,” Conner said during an episode of ‘Hey Rookie, Welcome to the NFL.’ “He taught me a lot of things. About how to get open and in and out of routes. For me to receive passes from him was awesome.”

Conner, who ultimately was drafted by the Steelers in the third-round, measured in at this year’s scouting combine at 6014, 233-pounds. He rushed for 3,733 yards and 52 touchdowns during his college career, which was briefly interrupted by him having a six-month battle Hodgkin’s Lymphoma in 2015.

Assuming Steelers started running back Le’Veon Bell is able to remain healthy moving forward, Conner isn’t likely to see a lot of playing time on offense during his rookie season, but with that said, he’s still likely to be used sparingly at the running back position at some point during the 2017 season. Additionally, Steelers general manager Kevin Colbert has since made it clear since the draft ended that he’s excited to see what Conner can give the team in 2017 as a special teams player being as he showed such a physical demeanor during his college career.

No need for introductions in Pittsburgh. The newest member of the @steelers has already been working w/ his new QB.#HeyRookie @JamesConner_ pic.twitter.com/7BqZ2KPXXy