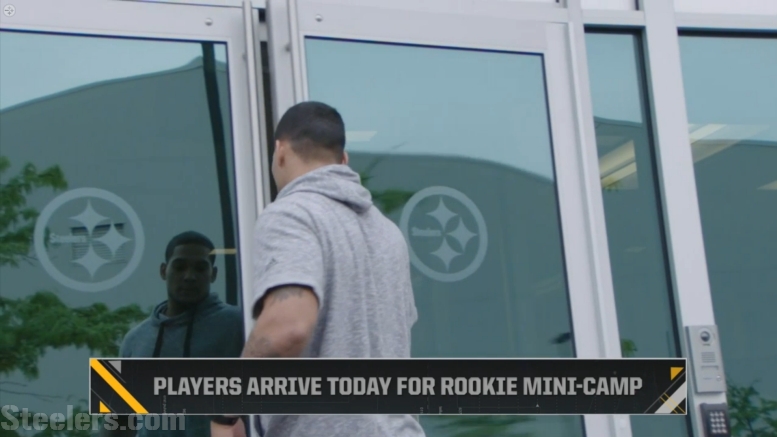 Although it might not have included the sounds of popping pads, or really anything to do with meaningful football activities, yesterday was a special day for all of the incoming rookies, and that includes not just the draft picks, but also the undrafted free agents, and even the rookie minicamp tryout rookies as well.

Yesterday was the day that they all got fitted for their helmets and donned the uniform for the first time. It is the first time since they left college that they have put on a uniform at all, and it was the first opportunity for them to don the attire that signifies that they are now a professional athlete.

While it might not particularly seem like much, it is a significant landmark for players, as it splashes them with a dose of reality and helps it all sink in that it’s really happening. This day was no doubt of especial import for many of the local invites, and that includes many players from Pittsburgh, among the draft picks, undrafted free agents, and tryout players.

The most notable name in that category is inevitably going to be Panther running back James Conner, whom the Steelers drafted in the third round of the 2017 NFL Draft. We all know his story by now—I myself have written about it a number of times in the past two weeks—but suffice it to say that it was a special moment.

He even talked a couple of days ago a bit about what that moment would be like with Teresa Varley for the team’s website. “It’s a blessing”, he said about being able to pursue his football career not just with the Steelers, but in the same building in which he carried out his collegiate athletic activities.

“It will sink in once I put the helmet on, take the field at practice with that Steelers logo on my helmet”, he went on. “I am just excited for that day”. That, of course, is a two-day process, as his helmet-fitting came yesterday, but today is the first day for football activities during the rookie minicamp.

There will be those who put a helmet on for the first time yesterday who may continue to do so for the next decade, or more. The  Pittsburgh Steelers drafted three players in the 2007 NFL Draft who have or had careers spanning that long, or nearly that long, with Lawrence Timmons and William Gay remaining in the league, while Matt Spaeth played nine seasons in the NFL.

That is what makes this particular occasion so momentous. Not because it is a unique experience, or that it is intended to be so, but because it is potentially the first repetition that you will spend the next decade of your life doing, hundreds of times over, if you’re lucky. The journey in that direction started when they were signed, but donning the uniform for the first time is an immensely symbolic step forward.