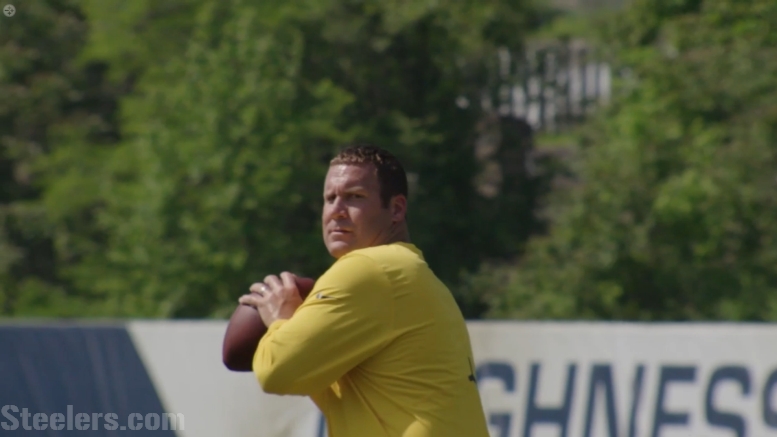 Even though the 2017 NFL season won’t get underway for several more months, that’s not stopping Peter King of Sports Illustrated from making some early bold predictions.

In his Tuesday NFL team rankings following free agency and the draft, King, who by the way has the Pittsburgh Steelers ranked fifth-overall exiting the month of May, predicted that quarterback Ben Roethlisberger will have his first career 5,000 yard passing season in 2017.

“We may never know the truth about the “retirement” talk of Ben Roethlisberger, but some of his discomfort with the team may have stemmed from the lack of alternatives to Antonio Brown in the passing game. Now, with Bryant back (for how long, who knows) and with the arrival of Smith-Schuster, Brown has some company in the passing game. Recall the impact of Bryant when he last suited up for the Steelers. With Brown out after suffering a concussion the previous week, Bryant caught nine passes for 154 yards (in 15 targets) at Denver in a playoff loss. This Pittsburgh offense should be as explosive as any Roethlisberger has had if 6’1½” Smith-Schuster makes the impact the pro-ready receiver could make, and if Bryant stays on the field. With Le’Veon Bell in the backfield as the most dangerous rusher in the AFC (rookie Pitt back James Conner is his insurance policy now that Williams has left for Denver), the Steelers will be a formidable challenge for the best teams in football.”

Wow, I must have missed running back DeAngelo Williams signing with the Denver Broncos. All ribbing of King aside, a 5,000-yard passing season for Roethlisberger in 2017 is certainly attainable and especially if he’s able to stay healthy the entire year.

The last time Roethlisberger played in all 16 regular season games was in 2014 and he ended that campaign with 4,952 yards passing and 32 scoring tosses. If you do the math, Roethlisberger averaged 309.5 yards passing per game in 2014. If we both assume and hope that Roethlisberger won’t have to play in the Steelers 2017 regular season finale against the Cleveland Browns due to the team being unable to improve their playoff seeding, that would mean he’ll need to average just over 333 yards per game passing in the first 15 games of the season.

To date, only nine separate times has an NFL quarterback thrown for 5,000 or more yards during a regular season and just five different quarterbacks have managed to accomplish the feat with Drew Brees being the latest to do so just last season.

While Roethlisberger certainly has the offensive receiving weapons needed to throw for 5,000 yards in 2017 and especially with it looking like wide receiver Martavis Bryant might ultimately wind up being fully reinstated after sitting out the entire 2016 season due to a suspension, the odds are still obviously against the Steelers quarterback finally hitting that lofty yardage number.

While a 5,000-yard passing season for Roethlisberger in 2017 would certainly be fun to watch, it will be more interesting to see the Steelers quarterback start playing better on the road again and definitely better than he did in 2016. Roethlisberger, in case you forgot, completed just 59.4% of his road passing attempts in 2016 with nine touchdowns and eight interceptions. Even during the 2014 regular season in which he just missed the 5,000-yard passing mark, Roethlisberger threw just nine touchdown passes and five interceptions.