Bringing back a s series I had a lot of fun exploring last offseason. Every player wants to improve, to elevate his game in all areas from one season to the next. Understanding that, we’re going to isolate just one area, one faction of a player’s game. The biggest area for improvement.

We’re going to start this year off with defensive end Johnny Maxey.

Johnny Maxey – Get In The Weight Room, Establish A Strong Base

This one is less about what I think and what his teammates tease him about. Dave Bryan posted Cam Heyward’s live chat Sunday and I”m glad he did because I missed it before. Heyward and others were teasing him but there’s some truth to it, joking about his “skinny legs” and “little calves.”

But comedy is funny because it contains a kernel of truth. And Maxey does need to keep getting stronger and filling out his frame, coming out of school at 6’4 293. It’s no surprise to think he’s a little underdeveloped after playing at a D2 school that didn’t have the weight room Power 5 schools are afforded. And in the NFL, it puts him at a disadvantage.

It’s a little unfair but compare him to Javon Hargrave. Hargrave has the Mike Mayock bubble butt and giant thighs. Look at this photo for comparison and even look at Maxey compared to every other defender. 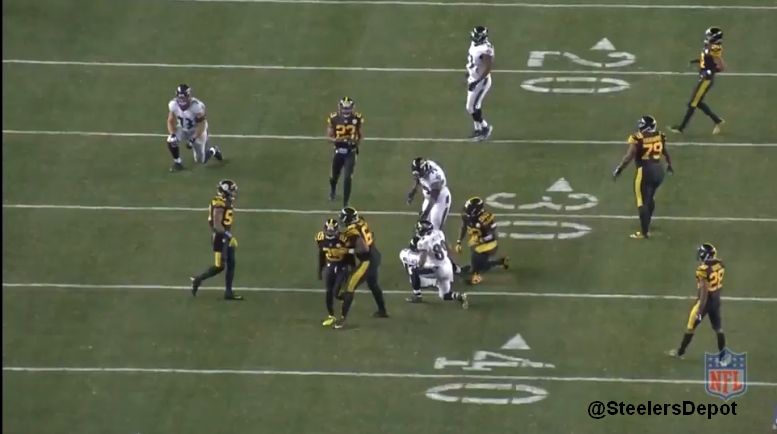 That lack of lower body strength shows up on tape, too. There are other issues at play, leverage and hand use, but getting stronger in his lower body will help him hold the POA. Uprighted by the Cleveland Browns’ left guard in this clip.

Here is more of a hand use issue and the fact he’s facing Marshal Yanda (#73) but again, he struggles as the point of attack.

Maxey wasn’t much of a pass rusher last year but to be fair, most of his action came in Week 17 vs Robert Griffin. To combat his mobility, he ended up containing the pocket on most of his pass rushes. And frankly, I’m not ever expecting him to become anything more than a below average pass rusher.

These next couple months will be key for him. He needs to get stronger for camp and throughout it because the preseason is his best chance to shine. Cam Heyward is healthy and the team replaced Ricardo Mathews with Tyson Alualu, meaning there isn’t a spot on the 53 for Maxey as things stand today. He’ll have to remind the team why they took a flier on him, a little known player from Mars Hill. To keep the team’s confidence high in him that if someone goes down along the defensive line, he can be counted on to play well when he’s called up.