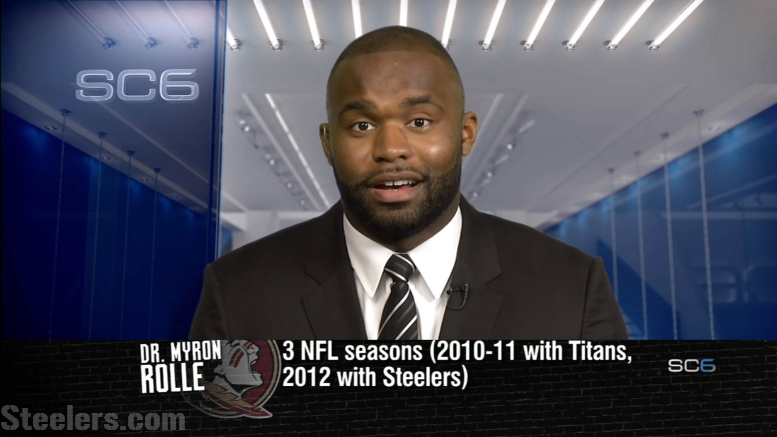 The Bahamian native is perhaps most well-known for earning a Rhodes Scholarship while with the Seminoles, but most who are reading this will no doubt be most familiar with him for the summer that he spent in the black and gold in 2012.

Rolle ended up being drafted in the sixth round, and many believe that he would have gone higher had he not pursued his academic interests, but either way, he never carved out a career for himself on the football field. So after three years in the game, the 6’2”, 215-pound safety began the path that led to him recently accepting a residency as a neurosurgeon with Harvard Medical School.

It doesn’t seem as though he regrets his inability to live out his football dreams for longer. He knows that he had two opportunities, and he was able to make the best of one of them. But he does regret not pursuing the other one sooner, and it has nothing to do with time wasted.

Rolle was on ESPN about a week or go, during which he talked about the fact that he suffered two concussions while playing football, and he said that he regrets continuing to play after that. But it was about much more than just that, or just himself.

“I regret it because there’s an issue with self-reporting”, he said during the interview. “There are some acute symptoms that go into brain injury and concussions. You can tell when a player is knocked out on the field, they have a concussion, everyone sees that. But it’s the times where you walk around and you may be a little bit off-baseline, cognitive decline, memory might be out of whack, you might have some balance issues”.

Rolle understands the minutiae of the football locker room and the camaraderie and the peer pressure involved in the game as well. He was both an observer of it, as well as a part of it. It contributed to his choosing not to report symptoms, as well as to the advocacy that he now hopes to engage in.

“I wish I reported it”, he said of his concussion symptoms, “and I think now that maybe I have more of a voice on this issue, being a neurosurgeon and resident and having researched and studied about concussions and traumatic brain injury” then perhaps his words will be heeded

“I’d like for players to get over this culture of trying to be macho, and fight the team culture of not wanting to report these things because they might feel ‘soft’”, the neurosurgeon and former football player said. “Talk about it. Tell the trainer, tell the team doctor, get off the field, and protect yourself, because you have a future”.

I’m sure not many who are already attuned to the message are listening just yet. But perhaps someday down the road, he will have a bigger part to play in the discussion about football and brain injury. Who knows. Few could claim to have more insight on the topic than he.