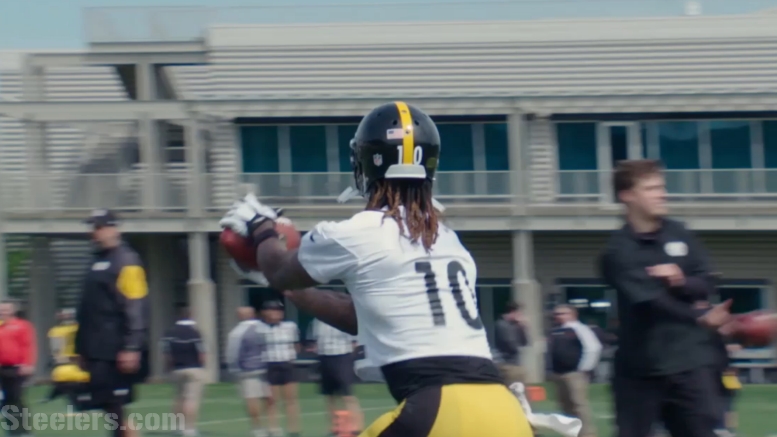 He may have spent quite a bit of the past year training, and preparing for his return to football, but that in itself doesn’t make the shift back to actual football a seamless one. Yesterday was the first time that Pittsburgh Steelers wide receiver Martavis Bryant returned to the practice field, and it was an interesting experience for him.

He said that it was “more of a nervous type of thing” rather than feeling as though he had some rust to knock off. “It’s been a whole year since I’ve been back here, so I’m just trying to get my feet back under me and just continue to work”, he told reporters after practice.

“It’s been a whole year, a lot has changed, some of my teammates have changed, the environment’s changed”, he continued to say. And there are a lot of new faces. Demarcus Ayers and JuJu Smith-Schuster have been drafted since he was last in the building. Justin Hunter and Cobi Hamilton were brought in.

And it goes beyond that, of course. Sammie Coates and Eli Rogers were still blips on the radar at best. Markus Wheaton is gone. Asked to elaborate on the difference in the environment, he talked about his teammates. “Some of the players”, he said. “When I was here two years ago there were different players, so I’m just getting back into it, learning my new teammates, just learning how the system works again”.

But “I’m just happy to be back”, he said, ultimately. “It’s a blessing, like I said, and I’ll just continue to work and try to get everything back”. And he is thankful for the teammates who were there for him most, particularly Maurkice Pouncey and Ramon Foster, as he said that they talked to them while he was even still in rehab, saying, “they’ve been a big help to me”.

He’s not coming in with much expectations for things to be handed to him. His focus right now is “just to work hard and do whatever the coaches ask me to do. Be there for my teammates and just be a team player”.

“I’m here just to be a team player and do whatever I have to do to help out the team, so whatever the coaches need me to do I’m gonna do”, he said when he was asked about the fact that he was given reps with the first-team offense in his first session back on the field.

“We spoke”, he said. “He’s still like my brother. We haven’t had that sit-down talk yet, so soon me and him will sit down and catch up, but until then I’m just gonna continue to work hard on the field”.