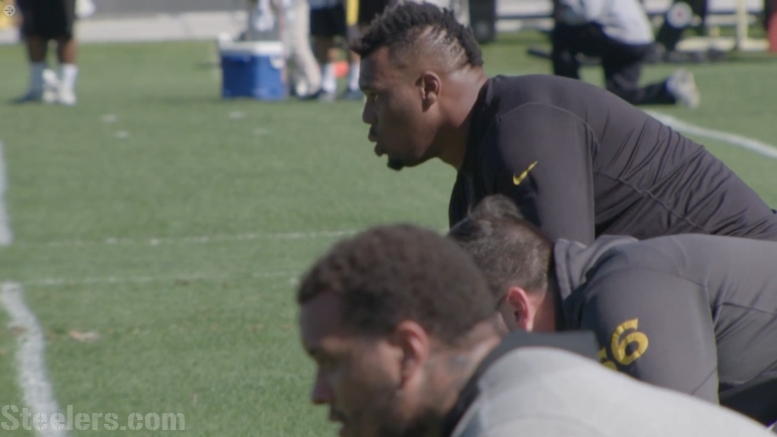 While it may very well be true that Pittsburgh Steelers veteran right tackle Marcus Gilbert’s play on the field has improved over the course of the past several seasons, I believe that it has been the perception of his play that has seen an even greater swing. That is to say, I believe his recognition was overdue when it arrived, and that he got more criticism than he deserved early in his career.

The only real blemish that he has remaining is the fact that he suffers a good number of injuries. He suffered a foot injury last season—which was a bit of a freak injury, and not the sort of chronic soft-tissue issues that make you worry—that caused him to miss three games, and he took a couple of games to get back into form.

He was still, however, among the best tackles in football, and the ever-loved Pro Football Focus has a graphic that they posted to social media yesterday that helps illustrate that point. While the focus was on former Bengals left tackle Andrew Whitworth, Gilbert was highlighted as well.

According to the graphic, there were only four tackles during the 2016 season who played at least 450 snaps in pass protection and gave up 20 or fewer pressures over the course of the year. Whitworth surrendered just 14, while Trent Williams of Washington allowed 16. Both Gilbert and David Bakhtiari from Green Bay allowed 20.

New Rams T Andrew Whitworth stood out among the NFL’s top tackles in 2016. Only 4 allowed 20 or less pressures on 450+ pass block snaps. pic.twitter.com/BXMLL01Igh

As I already noted earlier, Gilbert did miss three games this season, which is probably a pretty good indication that the others may have given up the same number of pressures on a greater number of snaps in pass protection, but the parameters of the graphic are clear. Among all tackles who played at least 450 snaps in pass protection, just four limited their pressures to 20 or fewer.

Were it not for the injury that he suffered during the season, I would probably have described the 2016 season as the best yet of Gilbert’s career, but I believe he was more consistent in 2015. And I expect him to put his best season yet together for this year, building off the stride that the offensive line hit as the season progressed.

It has been a long process, but the Steelers do seem to have put together a line that could be in the discussion ass the best in the game, which is not something that can have been said for the past decade. Pretty much everybody along the line is in their prime or entering it right now. Big things can happen when the big men up front are hungry.