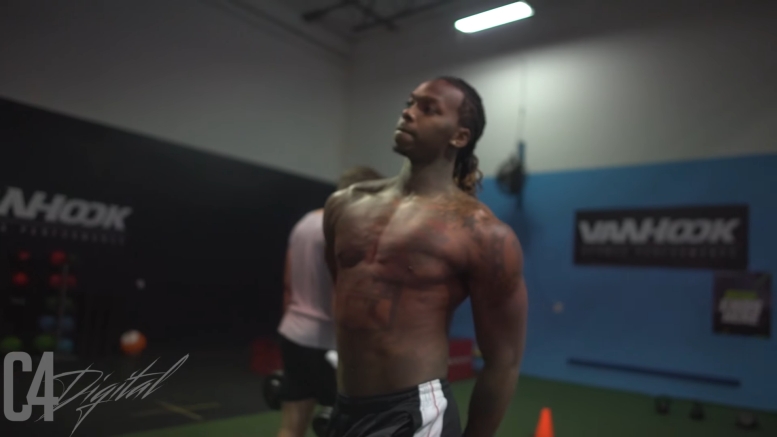 Unless I’ve overlooked them, I’ve yet to see any pictures of Pittsburgh Steelers wide receiver Martavis Bryant taking part in any of the team’s voluntary offseason training sessions since he returned to town. However, that’s not a big deal right now if he indeed isn’t considering that he might still need to meet other stipulations related to his recent conditional reinstatement.

Rest assured that Bryant is back around the team once again and according to Bob Labriola of steelers.com, he looks like he’s in great shape.

“I’ve seen Bryant around the UPMC Rooney Sports Complex, and he definitely didn’t spend his time away from the Steelers laying around on the couch eating bon-bons,” Labriola recently wrote. “He didn’t get shorter or slower, that’s for sure, and his upper body is well-defined. There also seems to be a resolve about him that he didn’t have during his first couple of seasons in the NFL.”

While it’s not much news, it’s good news nonetheless and with the Steelers set to begin their annual OTA sessions next week, all we can do right now is sit back and wait and see if he’ll be allowed to participate.

If you’ve been following along with the offseason news concerning Bryant, you know by now that he was reportedly training vigorously in Las Vegas while away from the team. That training apparently resulted in him adding some weight and judging by the few pictures that he has posted in recent weeks, he looks great and that matches Labriola’s recent assessment of the former fourth-round draft pick out of Clemson.

Over the course of the past several years it seems as though the Steelers have always had some sort of drama going on when they were about to start their OTA sessions. This year, however, there doesn’t appear to be any and that’s obviously a great sign.

Bryant now has an opportunity to be one of the league’s top comeback stories in 2017 and the Steelers offense could certainly use the kind of contributions he was providing on a regular basis prior to him being suspended for a year. Judging by the latest report from Labriola, Bryant appears ready to pick up right where he left off and potentially become the league’s top deep threat like many thought would happen a little more than a year ago.