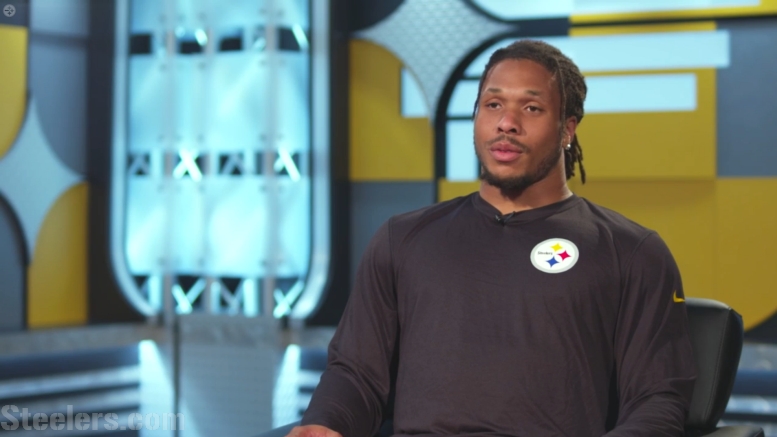 If Pittsburgh Steelers rookie outside linebacker Keion Adams spent any time trying to find an example to encourage him as he tries to battle long odds as a late-round draft pick to make the 53-man roster and to have a productive career, then he need not have looked very far.

The Western Michigan product was looking forward to working with veteran James Harrison, and he finally got an opportunity to do so as the team opened up in OTAs. “He came off as—not necessarily hard, but you could tell that he has that demeanor”, he said of his initial encounters with the Steelers’ all-time sack leader.

“He’s the alpha male, he’s the alpha dog. So it was just something that I just wanted to come in and listen to what he had to say, watch anything as far as detail and techniques as far as what I can do to up my game”, he told Missi Matthews recently during a sit-down interview with the team’s website.

Much of the conversation actually focused on Harrison, and rightfully so, as that is the sort of success that Adams would like to emulate, coming from a similar starting point. The Kent State product also came out of the MAC conference, as did Adams, though in his case going undrafted. And it was years before he had a stable presence on an NFL roster.

“A guy that’s coming from the MAC”, he continued, “establishing yourself in an organization that’s had so many great linebackers and so many great defensive players and him being one of the top dogs, coming from a conference that I played in, it’s just a story that I really want to have on my own, be able to create on my own”.

The young outside linebacker is taking inspiration from Harrison’s journey all the while getting the opportunity to work with him and learn from him first-hand as he pursues the same path 15 years later. It is a rare opportunity that the Steelers understand is present as the former Defensive Player of the year helps develop their young edge rushers, including Bud Dupree and T.J. Watt.

“You get what you see”, Adams said of Harrison. “He’s a hard worker, he’s determined, he’s going to go out there and give you everything he has. His display of character as far as [being in] that dog-eat-dog world, he’s going to grind”.

I can’t think of a better person to be able to teach through example than Harrison. It’s fortunate that he is still around as the likes of Dupree, Watt, Adams, and Anthony Chickillo continue to develop. And it’s also fortunate that all these young players recognize it and are taking advantage of the opportunity—which is perhaps something that Jarvis Jones didn’t adhere to as much as he should have.