While Watt’s development will be the most urgent and command the most attention as the team approaches their 2017 campaign, Adams’ treatment under Porter will be one to keep an eye on as well.

When Porter oversees Adams on the field this offseason, he may experience some nostalgia in seeing the seventh-round pick from Western Michigan rush the passer. While the two careers are separated by 17 years, Adams is built in a very similar mold to the man who will be responsible for guiding his development. 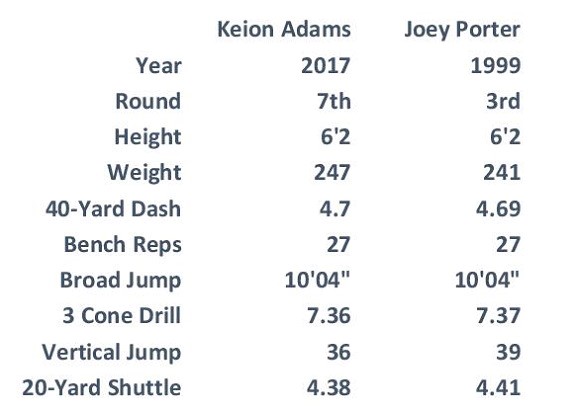 While Adams’ numbers originate from his pro day and Porter’s from the NFL Combine, you can see for yourself just how similar the two are athletically. In fact, it is almost a perfect match. Both had similar strength, speed and quickness, but most importantly, both Adams and Porter were roughly the same size coming out of college.

In a league filled with athletically superior individuals, size does matter. It matters to a great degree, actually, as falling even an inch shorter than the norm could result in a prospect’s draft stock plummeting. Even on the all field results a prospect offers could be deemed irrelevant if he is characterized as undersized for his position. That is why Adams’ “undersized” frame is important to consider now that he will be under the watch of Porter.

Both Porter and Adams fit the bill of being “undersized” for their positions coming out of college, as the two were both listed at 6’2 and under 250-pounds on their NFL Draft Scout profiles. While Porter was able to cover this infamous-sometimes tacky trait by carrying his great quickness, bend and strength in college over to the NFL, he will now be asked to replicate his success again, only this time from a third person point of view.

While the rest of the world will see a number 99 on the back of Adams’ jersey, Porter will likely see the number 55 when watching Adams from the sideline. Porter’s goal is to make sure that Adams not only looks like his past self but that he can play like it too. In an ironic fashion, this development may also mean that Adams beats out Arthur Moats, who currently owns the number 55 jersey number, for a roster spot.