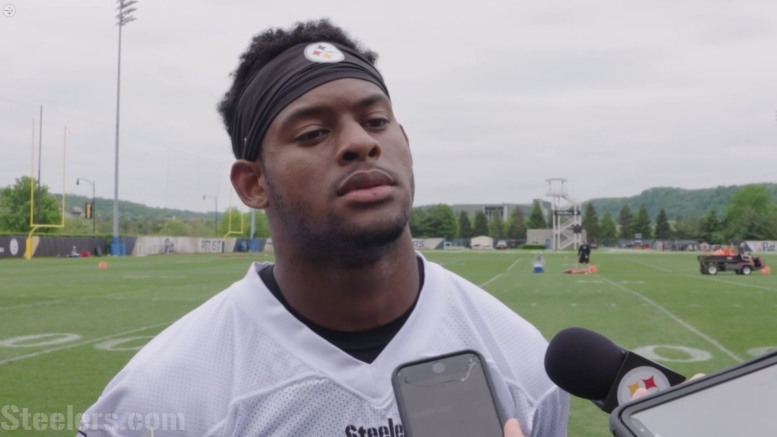 I don’t know if it’s actually true, but the Pittsburgh Steelers certainly seem to favor selecting a fair number of younger players in the draft, at times to the point where it feels like they do it more than anybody.

During the 2017 NFL Draft, they actually came away with the youngest player selected in wide receiver JuJu Smith-Schuster, the junior out of USC who will not turn 21 until December. While he may be the youngest, however, he is certainly not the most immature, and, if anything, he has used that age gap as fuel to accelerate his maturity.

Smith-Schuster was fielding questions from reporters during rookie minicamp over the weekend, and on reporter was trying to ask him about the difference between coming into the NFL at 20 and trying to contribute in college at the age of 17.

“The only difference between being 17 years old and the youngest guy on the team was that I had to mature earlier”, he said. “I didn’t have the time to be a kid in college. I got thrown right into the fire, started right away. ‘Let’s go, train’s moving with or without you’”.

He does carry with him a seemingly sophisticated level of maturity for his age, something that translates not just off the field, but on it as well, where he has already honed his craft fairly well in terms of knowing the details of his assignments, including blocking.

Asked whether his age has ever become a factor for him in the game and on the field, he said that “It never did. I see that as, age is just a number”, he continued. “At the end of the day, a person is just playing. They’re not going base a player off his age. You can be the oldest guy on the field and still ball. Shoutout to James Harrison”, whom he noted has been doing this for about a decade and a half already.

One of the traits in his game that the Steelers found most appealing was his ability and willingness to win contested throw during his college career, which is something that they are very much forward to seeing transfer at the NFL level. He was asked about how to train for such scenarios.

“It’s just desire when the ball is in the air, you just want to go get it”, he responded. “Throughout college there’s a lot of balls that were thrown in the middle of the field and I manage to go catch it. A lot of times, you just got to keep working on it. Practice makes perfect”.

Smith-Schuster seems to have a good head on his shoulders for any age, but it attracts a brighter spotlight on his maturity because of his youth relative to the rest of the league. Still, it certainly doesn’t appear to be anything he can’t handle.