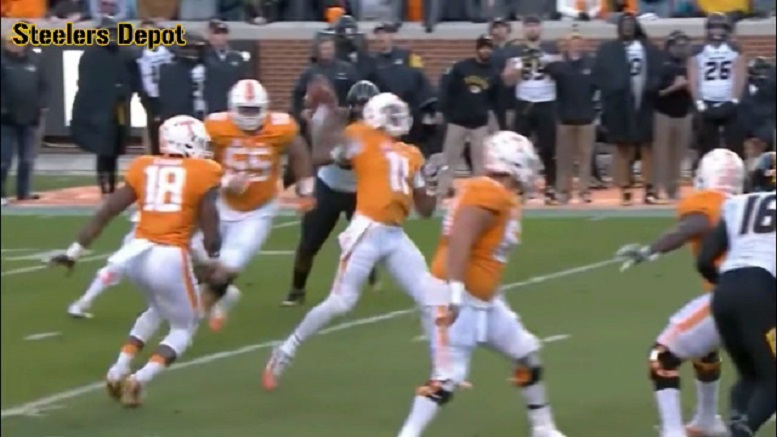 I have now completed my study of the 2016 touchdown passes that new Pittsburgh Steelers quarterback Joshua Dobbs threw for Tenneseee during the 2016 season and below is a recap of the data that I compiled from all 27 of those plays complete with a passing chart graphic so you can see what areas of the field he threw to as well as the distances.

10 of Dobbs’ 27 touchdown passes came off play-action and out of the shotgun while one other came on a flea-flicker play. In my opinion, Dobbs sells play-action well and he immediately gets his eyes up and down the field after carrying it out.

Dobbs made a few of these touchdown throws with pressure bearing down on him that ultimately resulted in him taking hits. He’s not afraid to stand in the pocket to deliver these kinds of throws.

On a couple of these throws, Dobbs showed great pocket presence in his ability to step up into it before getting rid of the football.

While a few of his touchdown throws were under-thrown, in general, most of those gave his intended target the better chance of coming down with the football with a defender in close proximity. With that said, credit needs to go to his targets for battling to catch these kinds of throws.

Dobbs’ Hail Mary throw for the walk-off win against Georgia was perfect as it had a nice hang-time and went right into a crowd of players.

13 of Dobbs’ 27 touchdown passes from 2016 were throws into the end zone and thus no yards after the catch were needed. Additionally, five of his touchdown passes came on third downs. 15 of these touchdown passes included Dobbs getting rid of the football more than 2.75 seconds after it was snapped.

On these 27 plays, Dobbs appeared to have great control of the Tennessee offense and a good understanding of what he was seeing from the defense. A few times you can see him directing traffic and perhaps audibling to a different play at the line of scrimmage.

While Dobbs doesn’t appear to be a natural thrower and in some respects, is a pusher, he still can make several different throws both long and short with not only velocity, but some touch as well.

While this study was evidently done on highly successful plays, it was very impressive just the same and very fun to do. If you missed any of the posts and videos included in this series, you can see them in the links included below.