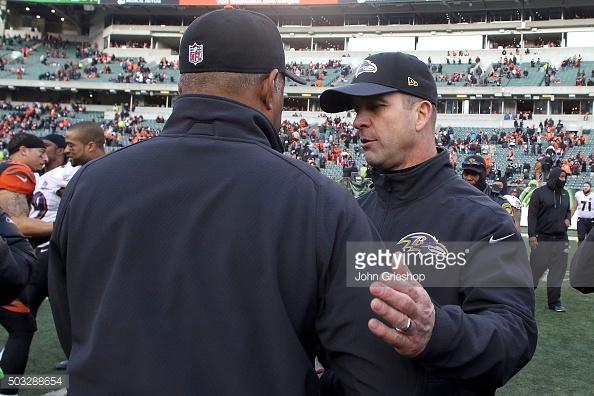 You probably read relatively recently that Cincinnati Bengals Head Coach Marvin Lewis was none too happy with the NFL’s decision to relax their rules legislating on-field celebrations beginning with this upcoming season. In an obvious sign of the end times, players will now be allowed to go to the ground, use the football as a prop, or even celebrate with teammates.

Lewis opined that such individualistic celebrations set a bad example for young players and degrade the notion of the ultimate team sport that football is supposed to be, all while failing to see the irony in the fact that his team just drafted a player who broke a woman’s face and stood behind another player after another recent arrest, and of course for the minor detail that the new rules would now allow non-individualistic celebrations, which were previously banned.

Baltimore Ravens Head Coach John Harbaugh? He probably laughed if he ever got wind of what Lewis had to say. In fact, Harbaugh was among those who were actively pushing for the rules to be lightened. He spoke about it last week.

Now, a writer with more snark might be inclined to point out that Harbaugh’s desire to see his players celebrate more is because his teams haven’t been scoring a whole lot of points in the past couple of seasons, and have missed the playoffs in three of the past four seasons. So perhaps what he is really looking for is simply more touchdowns. Of course, I’m not that kind of snarky writer, so I won’t point that out at all.

It wasn’t just a division rival who pushed back against Lewis’ old-timey criticism of the young whippersnappers hooting and hollering, either. Commissioner Roger Goodell also quipped after being asked about the criticisms that he’s “heard it From Marvin before”.

Lewis is a member of the NFL Competition Committee, which voted on the rule. Ravens General Manager Ozzie Newsome and Pittsburgh Steelers Head Coach Mike Tomlin are as well. The Steelers have had their share of celebration penalties in recent years.

Nobody is happier about the rule change than the officials, however, who can now finally stop keeping track of the number of hip thrusts a player incorporates into an act of celebration. Though I’m sure Antonio Brown doesn’t mind it either. It would have saved him a headache or two last year.