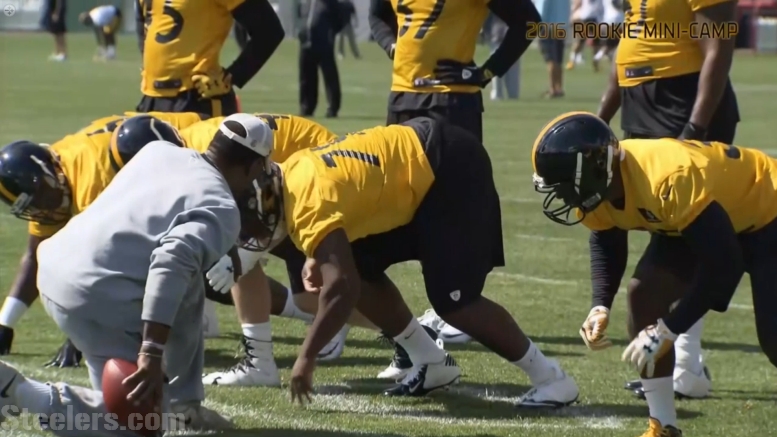 It seems as though Pittsburgh Steelers rookie seventh-round outside linebacker Keion Adams will already have one prominent advocate in his corner as he continues his journey, seeking to become a professional football player—or more specifically, one who actually makes a 53-man roster.

Teresa Varley wrote for the team’s website yesterday that he has already forged quite a relationship with one player currently on the roster, having grown up with last year’s third-round draft pick, defensive tackle Javon Hargrave, who began his rookie season a year ago as a starter and capped it off with a sack of Tom Brady.

Adams faces infinitely longer odds of making the roster than did Hargrave, who was virtually assured a roster spot after the Steelers lost their starting nose tackle, Steve McLendon, in free agency earlier that year. Meanwhile, Pittsburgh had already drafted another outside linebacker in the first round of the same class.

But he clearly has a shot to make the team, and should that occur, Hargrave may end up the happier of the two. “I was screaming like it was me being drafted”, the big lineman told Varley recently when he heard Adams’ name followed by “Steelers”.

“He called as soon as it happened. We were shouting and screaming. I told him let’s get to work”.

To add a bit more context to this conversation, both players are natives of Salisbury, NC. In Adams’ words, “we grew up together. We played basketball in the backyard, we went to church”.

The two went their separate ways in college, with Hargrave attending a small school in South Carolina, while Adams—more than two years the younger of the pair—ultimately sought an opportunity with Western Michigan.

But now they are reunited in Pittsburgh, as Keenan Lewis and Mike Wallace once were in 2009. Also childhood friends, the Steelers drafted the cornerback and the wide receiver each in the third round of that draft, and both became starters for the team, though both departed in free agency.

Still, even while it may have happened in the Steelers’ recent history, I’m betting that it’s probably not all that often that a couple of players who grew up together in an area that is not necessarily a breeding ground for NFL talent would ultimately wind up playing for the same team together.

That personal relationship should help give Adams at least a sense of familiarity and comfort as he enters a new phase of his life, and Hargrave should ease his transition into the professional realm.

“He told me he loved it here”, Adams told Varley, regarding the city of Pittsburgh and the organization. “He said you work and go about your business. It’s a hard-working culture”, which is something that both of the North Carolina boys have readily embraced.