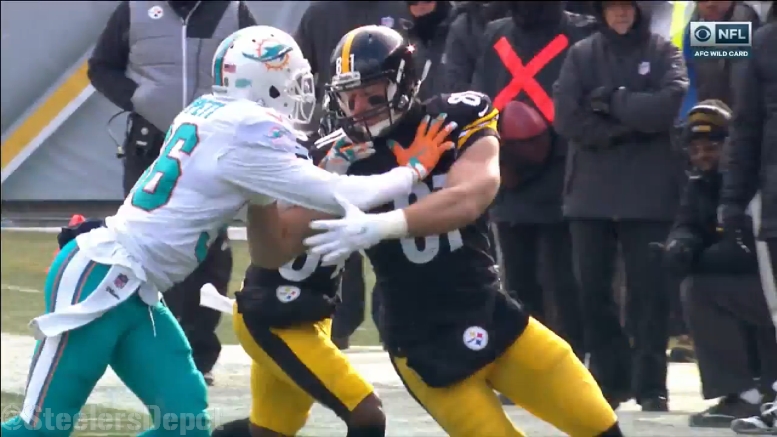 Clearly, the Pittsburgh Steelers are losing a lot with the release of Ladarius Green. We’ve beat that horse to death, I’m pretty sure. Now it’s about moving forward with who the team still has, not who they parted with. Jesse James is that man, the clear-cut starting tight end in 2017.

While there’s no comparison between Green and James as receivers, Green is infinitely more dynamic, the same is true for their blocking. Green is a big receiver and generally blocked like one, too. James is much more well-rounded and for a team like Pittsburgh, it’s especially important.

The Steelers are one of the few holdouts to ask their tight ends to do what tight ends traditionally have been asked to do; block in the run and pass game and be a tough, physical player. That’s how, as an example, Scott Orndoff knew he could stick in the NFL and will try to with Pittsburgh. This is what he told my buddy and A+ reporter Alan Saunders leading up to the draft.

“There’s always a need for a guy like me (someone that can block) at that position. Especially playing against 4-3 defenses, if you don’t have a tight end that can block people, you have to use extra linemen and then you kind of become predictable.”

It’s a skillset coveted in Pittsburgh. Enough to make you the starter. And that’s why the team is seemingly so high on James, not adding a tight end to the mix in the draft, when I’m positive they had a good idea about Green’s impending status.

That mainly stems around his ability to play in a three point stance with his hand in the dirt. He got better as the season went along and today, I want to highlight that strength and advantage over James.

This first clip actually comes from Week 2 when James was still struggling as a whole. But it speaks to Orndoff’s point and to anyone who watches the Steelers. They’re going to ask their tight ends to stay in to pass protect. Even against 4-3 defenses like the Cincinnati Bengals, with hulking defensive ends dying to take advantage of the matchup.

Here is James running Carlos Dunlap up the arc in Week 2, keeping the pocket clean for Ben Roethlisberger to deliver this strike to Antonio Brown.

Hands and feet. That’s all you can ask for. Hands into the chest and keeping your feet moving to run him up the arc. More than good enough.

The same here, this time against a 3-4 rush linebacker, against Baltimore week nine. James starts with his hands too far to the outside, something that got him bullrushed earlier in the game, but works his left hand into Courtney Upshaw’s breastplate and takes control. Without it, he was getting walked back. When he plays with proper leverage and hand placement, he’s able to absorb and establish his base. 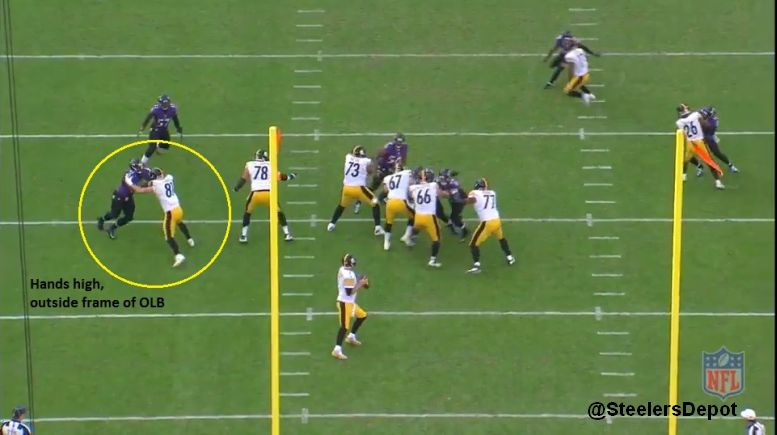 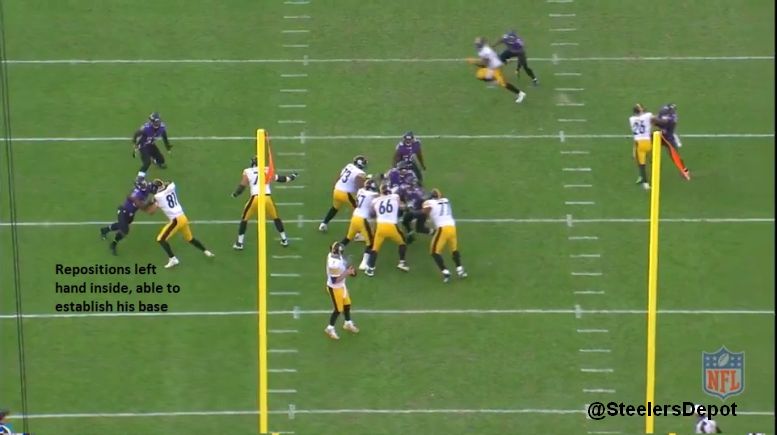 Now the run game. I mentioned this play in a poorly-audioed video after the playoff win against Miami. Love the technique and finish from James. Sets his hips after he and David Johnson combo the end, sealing the inside to create a lane for Le’Veon Bell. Then, and this is my favorite part, James shows the lower body strength and leg drive to move the DE out of his gap to ensure there’s a lane.

And James has shown the ability to work at the second level, too. Pin and pull against the Buffalo Bills. Works to the MIKE linebacker and able to stick at the second level. He sheds at the very end but it’s probably a smart play by James, avoiding a pointless hold. He did his job in a game where Bell ran for over 200 yards.

James is the old-school player. Green was the new-age tight end. Both serve a purpose in the Steelers’ offense. For the dynamic plays, Green was that guy (third on the team in a fraction of the snaps). But if you need someone to do the dirty work, the Steelers clearly have confidence – and positionally priority – in James being that guy.