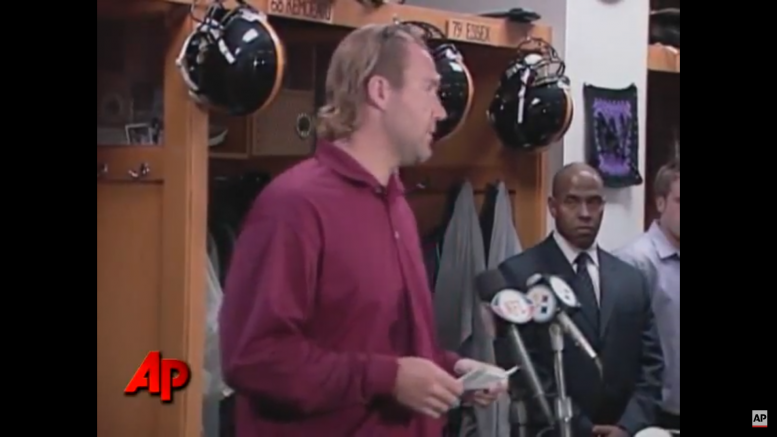 Though I’m not sure he might quite put it the same way, Pittsburgh Steelers quarterback Ben Roethlisberger has been more or less living much of his life on a redemption tour for the past seven years, ever since he was accused of sexually assaulting a college student in a bar in Milledgeville, Georgia in 2010.

Roethlisberger, in his late 20s at the time and at the top of his professional career, not long removed from becoming one of the youngest starting quarterbacks to win multiple Super Bowls and on the heels of signing a massive contract extension that would pay him over $100 million, was a different man then than he is now.

He was single, for one, and he might even admit that he enjoyed ‘the hunt’, so to speak. Now he enjoys a different sort of hunt, in the outdoors—for better or worse. But he has become a family man in the intervening years, getting married and since having three children.

Roethlisberger has talked on a number of occasions how much his family has reshaped his perspective on his life and his career, and how returning home to his family every night is one of the central focuses that he keeps in mind as he contemplates his future.

One of the few remaining tasks that he had left to tackle since attempting to reconcile first with his family, then his employers, his teammates, his fans, the public, and ultimately, himself, has proven to be his home town of Findlay, Ohio, where he attended high school and became a breakout star player.

It was earlier this year that Roethlisberger finally returned to town when he and his sister were both inducted into the local Hall of Fame for their excellence in sports while there. And according to a recent interview with Ron Cook, “he ranks that as one of his greatest honors because there is nothing quite like feeling welcome in your hometown”.

Roethlisberger noted that during his induction speech, in which he apologized to the people of Findlay, “I let the negative comments of a few cloud my judgement about the many”, he told Cook. “The voices of the few haters are so much louder than the voices of the many”.

It is true that following the Milledgeville assault allegation his adopted home town grew cool on the former local prodigy. He even took to changing the home town listed in his official team biography to the district of paired towns, Mount Cory and Rawson, referred to as Cory-Rawson. But as he has improved his life, so have opinions.

“I understand that now”, he said about neutralizing the volume of the negativity. “I told my wife that night, ‘it’s amazing how good I feel being back here’”.

It seems to me that this trip back to his home town to a warm reception was a moment of growth and reassurance for Roethlisberger, perhaps helping to make peace with certain elements of his past. Not that I expect him to move to Findlay after he retires.