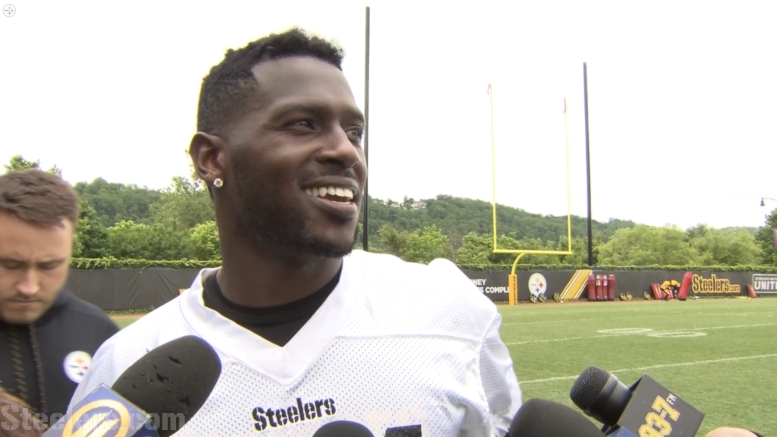 There aren’t many sure things when it comes to the game of football, but Pittsburgh Steelers wide receiver Antonio Brown may be as close as they come. The consistent quality and quantity of production that he has churned out over the course of the past several season is virtually unparalleled, and he is still in his prime.

He had a supposed ‘down’ season last year and still finished in the top five or higher in receptions, receiving yards, and receiving touchdowns, and he turned it on at times in the playoffs as well. He scored two touchdowns of 50 or more yards in the Wildcard Round back in January, his first postseason scores.

Even though he already cashed in to somewhere around $40 million over the course of the past five years, however, the Steelers were comfortable with the plausibility of his production continuing into his thirties when they signed him to a new extension this spring that was worth an average of $17 million in new money, ultimately tallying at five years and $72 million in total, I believe.

Does that make him more inclined to ease up in his workouts? I think you already know the answer to that. This offseason, he has even become more active in posting some of his workout drills on social media, with an aim, he told reporters yesterday, toward inspiring others to put in the same amount of work.

Brown is a player who always believes that he can improve, which might not be surprising for a first-team All-Pro who had to come into the league as a sixth-round pick and fight for a helmet on a weekly basis. “You’ve always got to get better”, he told reporters. “You’ve got to continue to grow to get better”.

Speaking of pressure, he has been facing more pressure on the field over the course of the past year as the Steelers have struggled to field a consistent option as the number two receiver, but that issue may have been solved with the reinstatement of Martavis Bryant. Not that he would include that in his excitement to see his friend back on the field.

“I’m excited”, he admitted, but he said that ”every guy in a helmet can be the reason you win”. When it comes to Bryant, primarily, he said, “I’m just excited for him just his growth, his development, how he handled his situation and what he’s been through”. And I’m sure those in the wide receiver room will surround him to help him as he returns to the game.