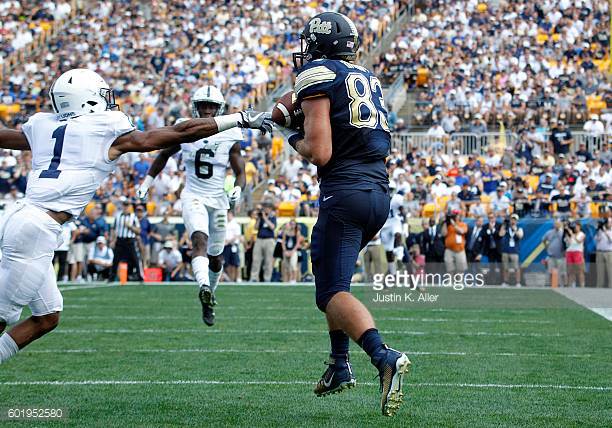 Getting close to the finish line with our next-to-last UDFA report. Pitt TE Scott Orndoff.

– NFL size, length, and hand size, well put together overall (33 1/4 arms, 10 inch hands)
– Most work came out of a three point stance
– Capable blocker with tight hands and functional strength
– Able to steer and drive DBs out of the way in space
– Good football IQ, runs away from defenders and does well to find space
– Crisp route runner who doesn’t drift and gets proper depth
– Slightly better straight line speed than expected
– Shows ability to find the football vertically

– Overall limited athlete who doesn’t show much explosion and isn’t a YAC threat
– Stands up too tall out of his stance as a receiver
– Trouble making catches in traffic, too many drops and double-catches
– Has to sustain blocks better at second level, falls off too eaily
– Much of production came via scheme, playaction and shovel passes, didn’t often have to create for himself
– Quiet statistically most games

I’ll give Orndoff this and correct myself at the same time. He isn’t the pure-blocker that I wrongly assumed when he was first signed. Now, don’t mistake that for him being some kind of terrific athlete. He isn’t. He may not even be average. But in a straight-line, he can scoot a bit and while stats can deceive, he did average over 15 yards per catch. That’s a healthy number.

And generally speaking, he is going to be blocker-first. He spent most of his time at Pitt in a three point stance so there shouldn’t be a huge learning curve there. He’s an above average blocker who can dominate DBs in space. Watch him clear the path vs Northwestern.

Though a marginally better athlete than I expected, I was disappointed with him as a receiver. Struggled with drops and contested catches.

I get this one vs Northwestern is really difficult but it’s 3rd and 10, late in the game, down by seven. Gotta make that catch. He doesn’t.

A tight end has to be able to make tough, contested catches. They do the dirty work in the middle of the field. That’s one reason why Heath Miller was so good even though he was never a remarkable athlete and faded even moreso by the twilight of his career. I don’t have enough confidence in Ordnoff to do so.

Another drop of his.

Not as good a blocker as David Johnson. Not as good a receiver as Xavier Grimble. While I think Orndoff will be generally competent in camp, I don’t imagine him landing on the 53. Practice squad will be his best chance. A slightly stronger, better version of Paul Lang, if you remember him, a player who was quickly discarded in camp a year ago.