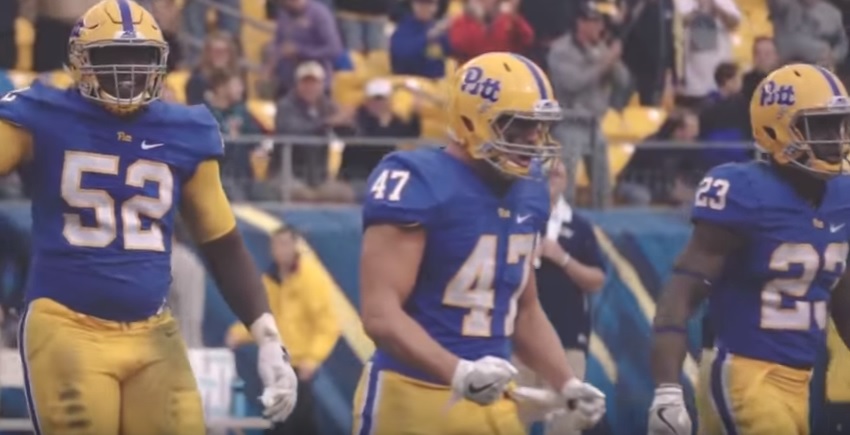 – NFL size
– Reads keys vs the run well and shows proper run fill
– Takes good angles to the football
– Strong at the point of attack, plays with proper leverage and able to stonewall lead blockers through the hole, reliable tackler
– Uses his hands well and able to defeat blocks
– Adequate in coverage, capable spot dropped who reroutes receivers and does well to get depth/width to take away throwing lanes
– Productive career, lots of starting experience
– High effort player

– Didn’t test well though a better athlete than his numbers indicate
– Average foot speed who doesn’t have an obvious physical trait
– Not going to excel in man coverage, spot drop zone coverage type
– Numbers slipped in his senior season, especially his splash plays

I don’t think Galambos was worthy of being drafted, we’re still talking about a guy who ran in the mid 4.9’s, but he looks good enough to be worthy of a undrafted free agent contract. Either way, Galambos got into the Steelers’ minicamp as a tryout player and made the team. For good reason. The tape is solid, relatively speaking.

He plays the run well, both in his run fills and ability to take on and defeat blocks. Had a lot of success versus Sam Rogers of VT, the top fullback in this year’s class. Watch him stop Rogers’ in his tracks. Galambos is #47.

And I like his ability to work off blocks too. Good hand use for a MIKE linebacker.

That will come in handy on special teams, where he’ll obviously have to cut his teeth in order to stick around. He isn’t a natural pass rusher, though like the Steelers do, he lined up on the edge on third and long, but he has the hand use in the run game that will serve him as a linebacker and on the coverage unit.

Though his run fills are strong and he generally showed a quick ability to diagnose, there is still some work there to do. Suckered in on this playaction and gives up a touchdown. Didn’t read the high hat read.

There is some talent here. He isn’t flashy, falling into that Tyler Matakevich mold, but he isn’t an awful athlete either. He can spot drop without major issue and is a better athlete than the 40 time suggests. It’s a food fight for any of those final practice squads, including with Keith Kelsey, one of their top UDFAs, but it wouldn’t surprise me one bit to see Galambos nab one of those ten spots.