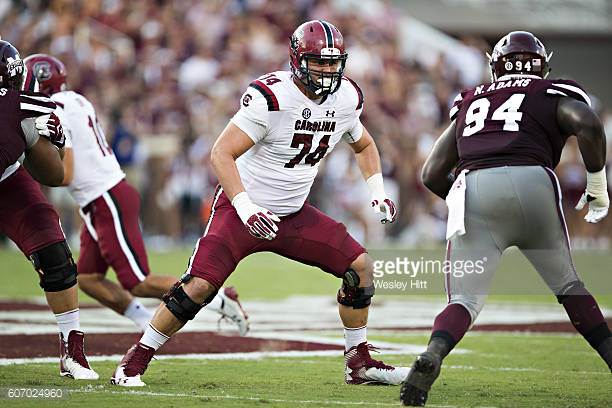 – NFL size and looks the part, appears to have good length
– Shows power on his punch when playing with proper leverage, good strike
– Can hold the POA when he’s able to uncoil his hips
– Versatile, NT and DE experience
– Gets his hands up in throwing lanes
– Decent motor who runs to the football
– Vision as a two gapper who looks to get off blocks in the run game
– Special teams value with a knack for blocking kicks

– Below average athlete both in testing and on tape
– Offers nothing as a pass rusher, doesn’t have a go-to move, let alone a secondary one, and routinely stuck
– On ground too often in the run game
– Washed and blown out vs the run, struggles mightily vs double teams, doesn’t at the least collapse to avoid getting walked back to the linebacker
– Needs to work on staying square in the run game and keep vision on the ball
– Has to bring lower half with him and uncoil his hips, leans too often into the block and loses strength
– Limited production and sacks weren’t hard-earned
– Only a one year starter and often rotated out, especially on passing downs/situations

There is a light in Adams’ game that gives an optimistic glow but man, it’s pretty faint. Again, I get it, they’re UDFAs, not first round picks. But I’m not sure if he’s simply a good enough athlete to survive.

To the good, when he is playing with technique, he shows power on his punch and the ability to get off blocks in the run game. The best example of that I could find came against Kentucky this season. Here he is as the LDE, #94.

Playing the run is his calling card but that too is inconsistent. On the ground far too often, a cardinal sin, and doesn’t always stay square at the LOS. LDE below.

And as a pass rusher, Adams doesn’t offer anything. Stuck here. No moves, no ability to get off of blocks. Contain guy only. He’s going against the center in this clip.

To be fair, he tested similarly to L.T. Walton who has carved out a role in the NFL. But I think Adams is even a poorer version of Walton. Not terribly hopeful for his training camp performance and think he’ll struggle to even push Johnny Maxey. The team may play him at nose tackle as an undersized guy there, like Roy Philon, and if he does, he’ll have to get a lot better against double-teams.