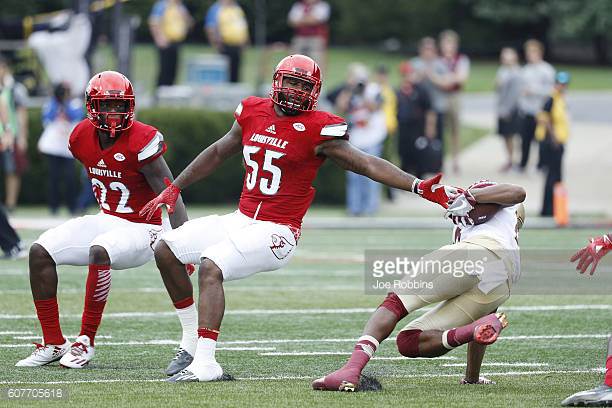 Next up is Louisville linebacker Keith Kelsey.

– Reliable tackler, physical player who comes downhill with proper pad level
– Takes good angles sideline to sideline and makes up for lack of speed
– High effort player, doesn’t loaf and runs to the ball anywhere on the field
– Better short area quickness than expected in coverage, able to drop his hips and change directions
– Does well spot dropping, reroutes receivers through his zone and closes quickly when receivers enter it and settle
– Shows pop on contact, able to uncoil his hips and get off blocks of tight ends who try to base block him
– Came in clutch and made some big plays, including in coverage
– Lots of starting experience
– Football bloodlines

– Below average athlete, ran terribly at the Combine
– Able to read keys in the run game and fill but can be influenced by running backs pressing the hole behind the LOS and changing direction, causing him to abandon his gap
– Lacks burst and isn’t always able to get to the runner in time through the hole between the tackles
– Experience in coverage and asked to be deep hold player in Cover 2 but limited athleticism will cause him to struggle in that area in the pros, best in shorter spot drops and covering bigger backs in the flat
– Can get stuck on blocks when OL/FB are able to get his hands inside of him

At first blush, from a purely positional standpoint, Kelsey felt like he had the best chance to compete for a spot on the 53 man roster. After watching him, eh, the depth chart might look open, but Kelsey’s game doesn’t offer much in the way of confidence.

To the good though, which is where we begin. He’s a reliable tackler with a desire to be physical despite dealing with frame limitations. Despite that speed, he takes good angles to the ball and plays with relentless effort. Changes his angle and takes down Dalvin Cook on the sideline. He is #55 in these two clips.

He’s physical at the point of attack too, blowing up this fullback – granted, it’s Charlotte we’re talking about – and putting him on his butt.

The bad is a little tougher to show. But Kelsey is slow and definitely a below average athlete. He ran a 4.92 at the Combine and only bettered that to a 4.9 at his Pro Day, according to NFL Draft Scout. Look at Combine history – since 2000, at least – and there are only 30 linebackers who have run as slow or slower. Only two have had big NFL success: Brandon Spikes, now out of the league, and Vontaze Burfict, who is a legitimately insane person.

The other names on the list aren’t just forgettable; they’re invisble. Half don’t show up even in football databases (Freddie Roach, Kai Parham) and the other half who never recorded a tackle (Taiwan Jones, Jeremy Beal).

The odds are long, is what I’m saying. Though Kelsey can be physical and was showed more impressive change of direction than expected, he has some major athletic limitations, and history, to overcome. There is a battle to be had with Steven Johnson, L.J. Fort, and the like, but don’t get your hopes up. I wish the Steelers would at least take a glance at an inside linebacker with some measure of athleticism, just to throw a different body type into the mix.