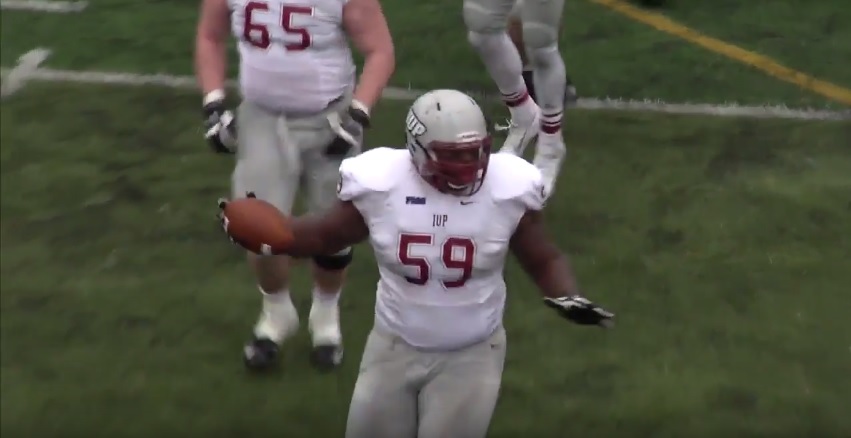 Today we look at maybe the best UDFA the team brought in. IUP guard Ethan Cooper.

– NFL size, biggest guy on the field at D2 level with large, powerful lower half, decent length and big hands (32 5/8, 10 3/8 respectively)
– Tremendous upper body strength, strong hands and ability to steer in the run game
– Shows strong, wide base in pass protection with heavy hands and makes it tough for DL to shed him once he gets hands inside
– Lower leg drive with ability to uncoil his hips in the run game
– Nasty, old-school demeanor who looks to finish his blocks and had multiple pancakes
– Experience pulling and shows adequate athleticism and ability to get square up through the hole
– Tackle/guard experience

– Played in up-tempo offense, didn’t have to huddle often and wasn’t asked to kickslide as much as other linemen
– Benefited as a puller by lining up deeper on the LOS to avoid running into center, line splits/depth won’t happen in the NFL
– Inconsistent at the second level, drops eye level and can whiff on blocks
– Has to adjust to flow of linebackers and take better angles to his blocks
– Likely going to struggle at tackle due to below average lateral agility
– Lower level of competition

After the dust settled and we got a look at all the UDFAs the Steelers brought in, it looked like Cooper was the biggest name and best player of the bunch. Finally, the tape backs it up. We have someone to get genuinely excited about. Let’s take a look.

Cooper certainly has the attitude and nasty demeanor to play in the league. That’s where it starts for the position. If you’re not playing with the intent to pancake someone, get out of the league. But Cooper has it and I saw several pancakes in the games I saw.

Right tackle, #59 here. Watch him drive and run the linebacker ten yards upfield and mushing him into the turf.

He’s heavy-handed with the ability to steer defenders in the run game too. Literally moves the end out of his gap. Right tackle again, and you’ll see him move his guy late in the clip.

His hand placement and strength is an asset in pass protection too though I don’t think he has the lateral agility to seal the edge against top-tier pass rushers. Cooper is a good ‘ol strong country boy and physically, I don’t expect him to be overwhelmed in camp.

Of course, he is coming from a D2 school and there’s a competition concern. But the PSAC is arguably the best conference in D2 football so you’re getting the best gauge possible for him. On the negative side, aside from likely kicking to guard, he can struggle at the second level or against quicker defensive linemen off the ball. Can fall off contact and have trouble re-punching. Here, working to the 2nd level, Cooper drops his eye level and whiffs on the block.

This is from 2015 with Cooper at left guard.

It’s going to be mighty difficult to get a spot on the 53 man roster, which sours the excitement of him. But he’ll be competitive, won’t be overwhelmed, and I’m excited to watch him at Latrobe. Think he has a really good chance for a practice squad spot.