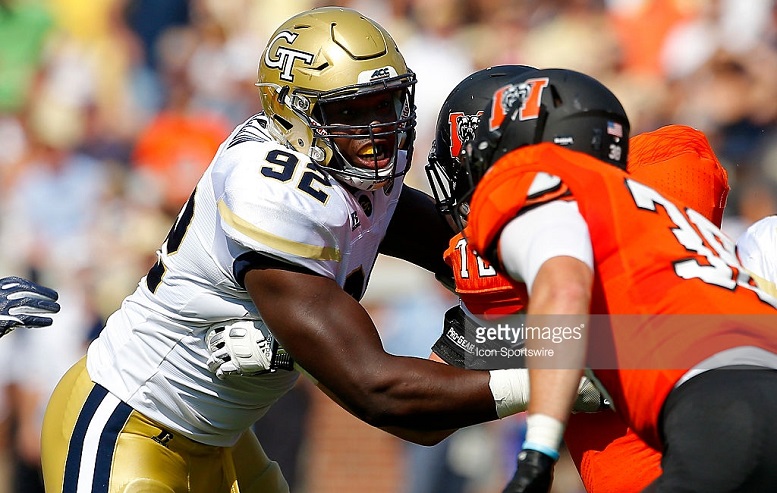 – Prototypical size with long arms, looks good getting off the bus
– Uses length well when two-gapping and able to create space between he and OL, overwhelmes smaller guards and centers
– Keeps vision on the ball and works hard to get off blocks, size/strength to finish
– Gets hands up in throwing lanes to disrupt passes
– Tested well at Pro Day
– High effort, motor player who chases after the football
– Experience playing as an interior linemen and out on the edge
– Has tools to make position switch
– Raw, relatively new to the game and isn’t a final product yet

– Less impressive athlete on tape than he tested
– Slow out of his stance and pops up too high
– Struggles with leverage in the run game, linemen get under him and initiate contact to knock him off balance, gets washed too often
– Struggles with his hands in the run game and as a pass rusher, first punch needs to be better and lacks any real pass rush move
– Has to consistently stay square against the run
– Sacks/impact plays often came unblocked or clean ups, not as impressive as they look on paper
– Big project, didn’t start many games and limited production

Francis Kallon certainly looks like one of the Steelers’ best UDFAs on paper. And athletically, the most impressive. Those are some seriously strong Pro Day numbers for a 295 pounds. Especially that three cone, if it’s legitimate.

When he flashes positively, you see that combination of innate strength, length, and vision on the football. He can manhandle smaller centers, shown here against Virginia Tech from this season. He’s the nose tackle in this clip, #92.

Unfortunately, Kallon was generally unimpressive on tape, even understanding that he’s a UDFA and you have to grade on the curve a little bit. Even his sacks were low quality. He shows his size/strength to take down Jerod Evans but you see there’s poor hand use, too high without power on his punch, and a clean runway after the linemen turns his back and runs away.

He has to get out of his stance quicker too. Here’s a clip from the Tropical Bowl, one of the All-Star games before the draft. 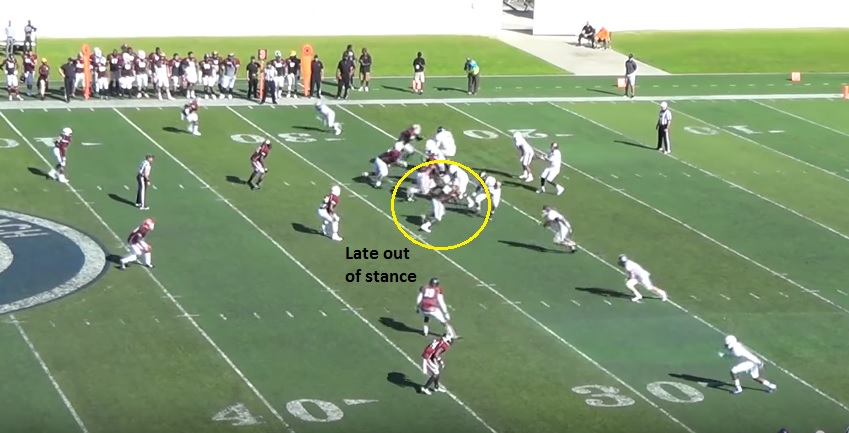 And leverage is an issue against the run. Plays too high, doesn’t get his hands inside, and too often washed out for how big he is.

Think of Kallon like the defensive end version of Daniel McCullers. Raw but physically imposing with room to grow. McCullers’ biggest issue, like I wrote about this morning, is his lack of aggression and I don’t know where Kallon falls on that spectrum. If he can play with some nasty, you might have something there.

But Kallon is a project in every sense of the word. I don’t think he’ll have a good camp this year. It’ll be overwhelming for him. He’ll look like Giorgio Newberry. But the team might keep him around because of the upside if he spends an entire year on the practice squad.

And though he was listed as a defensive end, I don’t discount him flipping to tackle once they get him into minicamp and OTAs. Similar to Brian Mihalik. Looks the part but lacks foot speed and enough athleticism going forward off the snap of the ball. But with his size and length, maybe a move to tackle would work, just as it did for Mihalik, who looked decent in camp and is still hanging around.