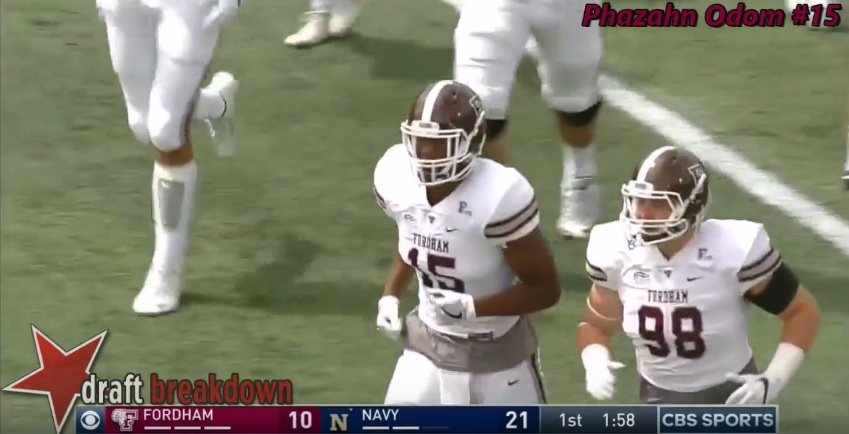 Moving our attention to one of the two tryout players signed by the team out of rookie minicamp. TE Phazahn Odom.

– Monster frame with matching length, looks good getting off the bus
– Able to locate the football and adjust to it
– YAC threat because of size, quick to the tuck, puts ball away and gets upfield
– Willing and able to go over the middle and make combative catches in traffic
– Capable of making high degree of difficulty catches
– Big catch radius due to height/length, hard to overthrow him
– Has flashed upper body strength as a blocker when playing with correct technique

– Maddeningly inconsistent who lacks nuance in his game
– Below average blocker who has tools but completely unrefined, needs to play with tighter hands
– Leg drive isn’t there, struggles to get a push as a run blocker and can get beat on the edge in pass protection, leans into his blocks
– Struggles to engage and sustain at the second level
– Little to no experience in a three point stance, most often stood up as a WR or in two point stance off ball, used on split zone concepts
– Has to sell routes better, tips off route with his eyes far too often
– Down senior season after excellent junior campaign

Odom was clearly the most intriguing tryout player in the minicamp slate so it’s no surprise to see him nab a contract out of it. When he flashes, Odom looks like a draftable talent. When he struggles, he’s all bark and no bite.

He’s signed for one central reason: playmaking ability. He brings it in punches. The YAC ability. A natural hands catcher, and the ability to make catches that few are able to do. You may have already seen it on Twitter but here’s a short montage of some of his best plays. Sorry if it takes an extra second to load up – it’s worth it, trust me.

But the upside and flashes are minimized by maddening inconsistency. For starters, it seems he was rarely asked to line up in a three point stance. He’ll look like so many of the move tight ends did at the Combine, especially with his height, he’ll have trouble combating the lack of leverage he has in tight spaces. I’m assuming the Steelers will work to minimize his use there and stand him up, play him off ball, but he’ll have to show something as a true in-line blocker.

That blocking? I don’t think he’s lazy, as some have tried to assert. But he is bad at it. Hands aren’t tight, doesn’t play to his power, doesn’t bring his lower half to finish his blocks. It can get ugly.

He could’ve been even more productive but dropped at least three goal line/end zone passes in the two games full games I watched (Fordham tape is hard to find). Has to show snap-to-snap consistency, something the league will demand.

While Odom is terribly raw, there is potential and definite practice squad material. He’s going to have to show he can look good in pads and not just shorts, where any 6’8 250 pound tight end should shine. He’ll have his ups, he’ll have his downs, and if he can show steady – even if it’s slow – improvement, he’s worth keeping around.