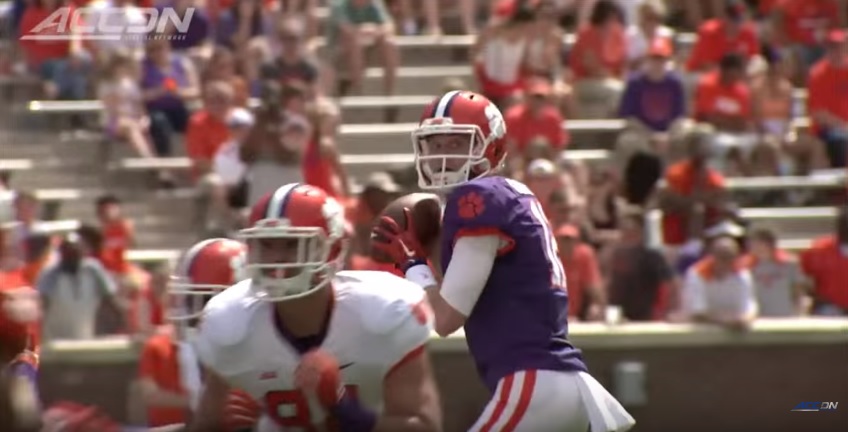 – Above average to excellent arm, tight spiral on all his throws
– Shows good ball placement on vertical throws to the sideline
– Some mobility and able to move to his left with adequate accuracy (right handed QB)
– Feels outside rush well and able to climb the pocket
– Good eye manipulation and ability to look off deep safeties to open up vertical throws outside the numbers
– Experience coming off the bench and being cold, thrown into the fire
– High character player, great teammate who was content with being backup entire career

– Slight frame who never really added enough bulk
– Accuracy on intermediate crossing routes is poor, passes routinely behind
– Trouble establishing rhythm, perhaps due to being a back-up, and ball needs to come out quicker on timing routes
– Has to show more touch, everything is a fastball
– Bit of an elongated motion and ball drops too far and away on his windup
– Will leave pocket too early when internal clock goes off even if there’s no sense of pressure
– Extremely limited exposure and opportunity in career
– A lot of production/chances came against FCS teams and all came with a big, comfortable lead
– Never played more than a half of football, wound up splitting time with the #3 in blowouts

I gotta admit I was surprised to see Schuessler secure an actual contract. When the news was first reported, I thought it was going to be on a tryout basis. Because hey, 66 career passes isn’t much to work with. But Schuessler got a bit of a raw deal as the backup to a first round QB. He got serious playing time twice this season. A blowout win over South Carolina State and when Watson got hurt vs Syracuse, though the Tigers had a big lead at the time.

Schessler has an above average to great arm who shows accuracy and strength downfield. Ball placement is strong on throws outside the numbers.

He shows eye manipulation and is able to look off safeties. Schuessler also has the ability to work through his progressions and his triangle reads are usually the correct one, even if the ball doesn’t always get there on time.

But his accuracy is below average, even if his 66.7% completion number looks shiny. It’s strong downfield but on short to intermediate crossing routes, he struggles. Too many thrown behind and he struggled to establish a rhythm. Two examples. Late/behind.

Schuessler is going to look good airing the ball out downfield but he hasn’t seen many live bullets and rarely the type of competition he’ll see in the NFL. I mean, the latter is a given, but the only team FBS Schuessler threw more than five passes against was Syracuse. The other two came vs Wofford and South Carolina State.

Can’t say I get very excited about this guy but with Zach Mettenberger’s release, he’ll likely be in camp as the #4 arm. I bet he’ll wow with a couple throws but snap-to-snap consistency is going to be a problem.