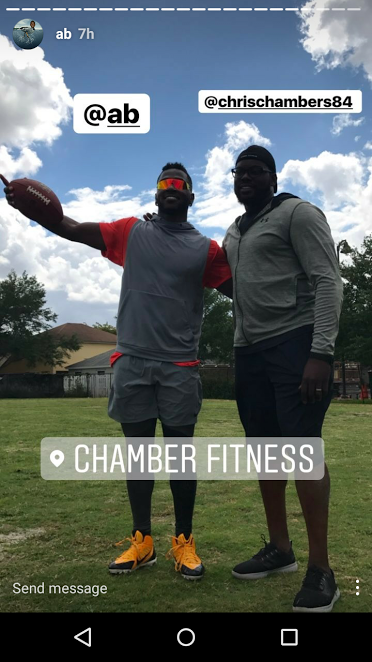 Antonio Brown is the hardest working and best receiver in the NFL. So you wouldn’t think he would need the guidance of anyone else. But Brown is going the extra mile, proving those previous two claims to be true, working out with former NFL receiver Chris Chambers yesterday.

Chambers played in the league for 12 years, seven of those with the Miami Dolphins, catching 540 passes for over 7600 yards and 58 touchdowns in his career. He transitioned to becoming a personal trainer after his playing days ended, running Chambers Fitness back in Florida. He talked about his post-NFL transition back in 2012, though total side note, he, uh, doesn’t seem to like Todd Haley. Just a nugget I wanted to share.

“Todd Haley. That’s a whole ‘nother conversation. He’s one of those head coaches that doesn’t respond to his players. That’s why he got fired. When he left there it was like a big breath. He kind of crushed my career a bit, trying to put other guys in, not really relying on his veterans.”

Brown seems to work just as hard in the offseason as he does the regular season. He spends most of his time working out in his home state of Florida. In past years, working out with an assortment of QBs – including Teddy Bridgewater – receivers, and defensive backs. He recently spent time training with Chad Johnson, Kayvon Webster, and a host of receivers.