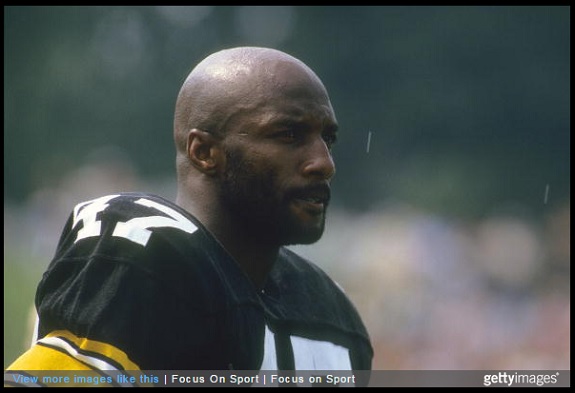 Over the past week, we’ve been counting down the Pittsburgh Steelers greatest draft hits and so far the discussion has remained…cordial. Well…now it’s time for the gloves to come off as things will get much tighter and difficult to discern in this round.

It’s time for a generational UFC battle supreme to break out as surely the Millennials will have issues with the opinions of Generation X…and the Baby Boomers, well there is all of that latent Purple Haze they are dealing with to further muddy the discussion.

I mean, can the Boomers be sure that the Pittsburgh Steelers really won four Super Bowls in the seventies? For that matter did the Americans actually land on the moon?

What about recent draft selections for the Steelers? Anybody going to complicate the argument…err…discussion here?

When evaluating the stunted success of Wheaton, Coates and Martavis Bryant to replace the “Young Money” third round duo of Wallace and Sanders, you have to wonder what could have been if the Steelers could have broken the bank and kept those two players on the roster.

Do you think Big Ben Roethlisberger would have minded seeing the familiar faces of Antonio Brown, Sanders and Wallace in his huddle the past five years? Who would you have double teamed?

But this is just fantasy football as the Steelers chose a different route and now we’ve still got this challenge remaining of selecting the Greatest Draft Hits of the third round.

In reality, you could shuffle the order of several of the names below and have a reasonable argument (including a couple of the alternates). But somebody has to start the conversation, so it might as well be me.

Let’s get going with the latest edition of the Steelers Depot draft history series.

To some more recent fans of the Pittsburgh Steelers it may be considered blasphemy to rank Mel Blount ahead of Hines Ward. However; Blount is already in the Hall of Fame, and unlike Ward, Blount was almost unanimously considered the league’s best at his position during the 1970’s and in 1975 was the NFL’s Defensive Player of the Year. Many still consider him the best cornerback of all time in the NFL. Not only was Blount a shutdown corner, he was a beat-the-living-daylights-out-of-you defender. Receivers hated playing against Blount because it meant they would spend most of the game with their facemask buried deep in the mud. Such was Blount’s dominance in the NFL that they changed the ways receivers could be treated. The five-yard bump rule that started in 1978? Not only was it due to the bullying style of the Steelers great corner but it was actually named the “Mel Blount Rule”. Unlike Deion Sanders, Blount never made “business decisions” in avoiding contact and was glad to participate in stopping the run as well. He finished his storied career in the league with 57 interceptions and is easily one of the greatest Steelers of all time. Like so many other players for the Black and Gold, Blount was also a Hall of the Famer off the field in performing great charity work. Ironically, after tormenting so many offensive players through the years, he served as the Director of Player Relations for the NFL during the 1980’s.

If ever a master craftsman was designing the ultimate Pittsburgh Steelers receiver, his work of art would look very much like Hines Ward. Hines was one of the toughest players and best blockers to ever play the receiving position. Disappointed that he wasn’t drafted until the third round Hines Ward carried this chip on his shoulder like his best imaginary friend and used it as a powerful motivator throughout his career. Perhaps if he gets a well-deserved nod for the Hall of Fame he’ll be willing at last to lay that chip down. Even his coaches and the front office doubted Ward because of a perceived lack of big play ability and they spent their next two number one draft picks trying to replace him (Troy Edwards 1999 & Plaxico Burress 2000). This only added fuel to the fire and Ward responded with a career that had him break nearly every significant team receiving record. What makes these milestones so significant is a large majority of his catches were made on critical and clutch third down and end-of-the-game-plays. To this day, Ward’s play has many fans believing the home stadium should be rightfully called “Hines Field”. A strong leader and colorful person in the locker room Ward was a winner of Dancing With The Stars and even played a zombie in an episode of The Walking Dead. Ward retired at the right time at the tailing end of his talent sealing his legacy as an all-time Pittsburgh great. Ward will always be remembered as a player who celebrated as much over a bone rattling crack-back block than a game winning touchdown. A true Pittsburgh classic.

Having to wait impatiently behind the likes of Steelers linebacker greats Greg Lloyd and Kevin Greene, fans questioned Gildon’s abilities early on in his career and wondered if he was a bust. But when it was Gildon’s turn to take the torch…oh my, my. All he did was become the Steelers all-time sack leader with 77 recorded during his career. A three-time Pro Bowler and 1-time first team All-Pro, Gildon was considered among the best pass-rushing threats in the league. Gildon wasn’t as flamboyant as some of the Steelers linebackers before and after him. Instead he just quietly and consistently went about his business. He made big plays constantly, turning games around during a period when the Steelers struggled mightily on offense.

Speaking of flamboyant, few players talked a better game in a Pittsburgh Steelers uniform than Joey Porter. But this big dog had both a bark and a bite ending his career with the Black and Gold with 60 sacks. Porter would have been higher on this list if he hadn’t left Pittsburgh early in his career. Even after his Steelers era he continued to thrive in the pursuit of quarterbacks ending with 98 in the record book before he hung up his cleats. Some of Porter’s most famous moments include chasing after Ray Lewis on the Ravens bus after a match and on another occasion getting kicked out of a game for fighting…before it started. Sometimes his antics drew attention away from people appreciating his talent. Yet, with all of Porter’s actions, they came from a genuine passion to win games and inspire his team to playing great defense.

In 1969, the future of the Pittsburgh Steelers defense changed dramatically with the selection of the legendary Joe Greene. But during that same year, in the third round, the offense received a similar boost with the pick of Jon Kolb. This jumpstarted the formation of the great Pittsburgh Steelers offensive line, one which would dominate defensive fronts for years to come. As being in the marquee position (left tackle) of one of the most prolific rushing offensive lines in NFL history, Kolb deserves credit here as being a great Steelers draft hit. A powerful man (he once placed fourth in a World’s Strongest Man Competition) Kolb went on to be strength and conditioning coach for the Steelers until Chuck Noll retired and Bill Cowher cleaned house. Kolb kept in amazing shape for his age (Google “Kolb Windshield Wiper” to see his YouTube hit).

Joel Steed (1992) A quiet performer and powerful man who anchored the defensive line as nosetackle for those great 1990’s Steelers defenses.

Mike Merriweather (1980) Another in the famous line of Steelers linebackers, he dominated play during the 1980’s. He wasn’t with the team long enough to make the top five here and these lists can’t be ALL linebackers.

Mike Wallace (2009) The draft class of 2009 had a chance of being one of the best ever for the Pittsburgh Steelers, but the front office failed to retain the talent. Wallace is no longer a popular name in the ‘Burgh following his quest for bigger fish in Miami before going to Minnesota and now…gasp…Baltimore…and his time was too short with the Steelers to make the list. But he should get a tip of the hat for the thrills he provided his first few seasons as he burst onto the scene.

Emmanuel Sanders (2010) Sanders was drafted as the member of “Young Money” with the most potential to start right away as he’s always been a polished route runner. Several nagging injuries slowed him down early in his Pittsburgh career and it was in Denver where he blossomed into one of the top receivers in the NFL.