Shot #1 – The NFL released the 2017 regular season schedule last week and if you are looking for something to keep in your wallet for easy access as to who plays who each and every week, print out this nice grid below that Andrew Lewis posted on Twitter recently. 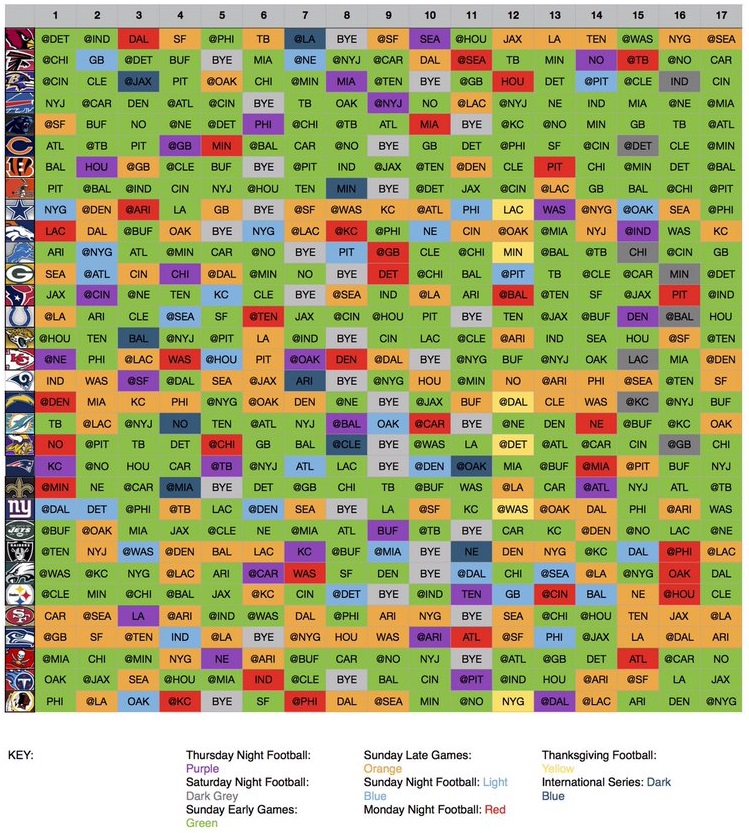 Shot #2 – With the 2017 NFL Draft getting underway on Thursday, Steelers general manager Kevin Colbert and head coach Mike Tomlin will hold their annual pre-selection press conference on Monday at Noon EST. While we’re unlikely to learn much from their annual session with the media, perhaps the two will be asked some interesting questions this year. You can bet we’ll be recapping all of the main talking points on the site immediately after the press conference is over and you should be able to watch it live on steelers.com.

Shot #3 – Barring something unforeseen happening, we are scheduled to have draft analyst Dave-Te Thomas on the Monday episode of The Terrible Podcast and we plan on peppering him with questions about this year’s group of players for at least a solid 45 minutes. That episode will hopefully go off without a hitch and should be posted on the site not long after we’re done recapping the Colbert/Tomlin press conference.

Ok, barring any unforeseen circumstances, I have Dave-Te lined up for Monday AM on the @TerriblePodcast

Shot #4 – The Steelers recently started Phase One of their offseason program last week and conditioning coordinator Garrett Giemont was interviewed and talked about what takes place during the first two weeks of the session and what isn’t allowed. Giemont, by the way, has been the Steelers conditioning coordinator since 2007 when Tomlin added him to the staff after he was hired by the team. Tomlin had previously worked with Giemont when the two were with the Tampa Bay Buccaneers.

Phase One of the offseason workouts has begun & Conditioning Coordinator Garrett Giemont gives you a closer look at the players workouts. pic.twitter.com/KP8TGzXGn0

Shot #5 – Remember former Steelers center Jeff Hartings? Last week he was named the new football head coach of Worthington Christian High School after spending the last two years serving as the schools offensive and defensive line coach. Included in the linked news report of his hiring is a long video of Hartings being interviewed after named the new head coach. He talks about his playing days during the interview as well as what ultimately led to his retirement after the 2006 season.

Shot #6 – In case you missed it, Pro Football Focus senior analyst Steve Palazzolo and the rest of his team team released their final 2017 draft prospect rankings a few days ago and it’s 200 deep.

Shot #7 – The NFL recently released their 2017 Draft notes and once again it is full of great information that includes some historical nuggets. You can read it in its entirety below.