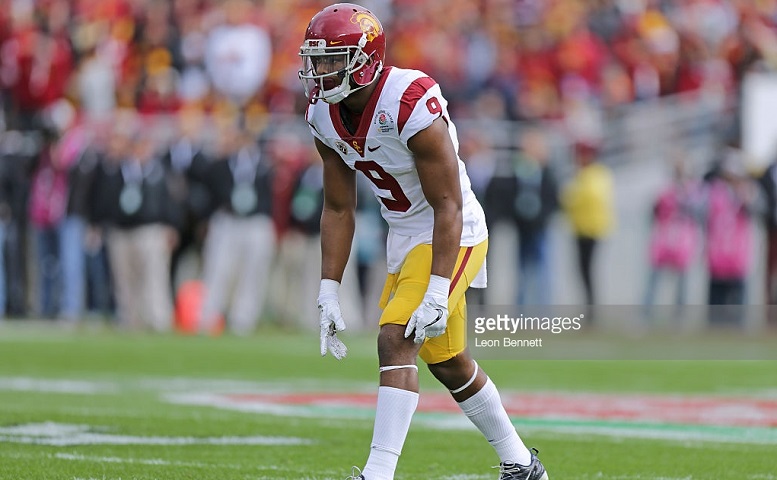 Raise your hand if you suspected the Pittsburgh Steelers to select a wide receiver before a defensive back.

Okay, a few hands up. Now keep your hand raised if you predicted the Steelers taking USC wide receiver JuJu Smith-Schuster in the second round.

Alright, still a couple of hands up in the very back, though I question why they still have their hands raised and not on a lottery ticket. Minus our few Nostradamus-like predictors, the thought of Schuster ending up a member of the Steelers’ organization seemed far fetched at best.

Schuster joins a deep receiving core, that just in the last months has seen the arrival of Justin Hunter and reinstatement of Martavis Bryant. On top of the team’s depth at the position, Schuster differs from what the team typically looks for in their early round receivers.

Schuster stands at 6’1, ran a 4.54 40-yard dash and averaged 14.5 yards per reception while at USC. While Schuster’s height could warrant a pass, his other two numbers slightly vary from the tall-vertical threat we have become accustomed to seeing the Steelers select. But perhaps we’ve just been focusing on the wrong numbers.

For the Steelers to select Schuster at a tender age of 20, the team likely made sure the USC receiver had both enough production and professionalism to back up his selection. Schuster’s production as a young receiver is not hard to locate as he recorded 54 receptions for 724 yards and 5 touchdowns as a true freshman in 2014. Then at just 19-years of age, Schuster recorded 89 receptions for 1454 yards and 10 touchdowns. Judging by the numbers, the Steelers had little reason to worry if Schuster could contribute against the grown men of the NFL.

Schuster’s professionalism was the team’s last aspect left to investigate and the Steelers acted quickly, interviewing the USC receiver at the NFL Combine.  Judging by the team’s selection of Schuster tonight, it does not take a rocket scientist to guess that he was very impressive during his interview process.

The truth may be that Schuster’s addition speaks more towards a team philosophy rather than a team need. As the Steelers have learned in the past couple of years, an injection of youth is a must when it comes to maintaining a productive receiving core. With Bryant left walking on a tight rope and Sammie Coates a question mark, the Steelers are just a few steps away from their fountain of youth being held together by duct tape and super glue. Schuster makes sure this is not a possible scenario, as his youthful age ensures the fountain of youth runs smoothly for as long as the team requires necessary.