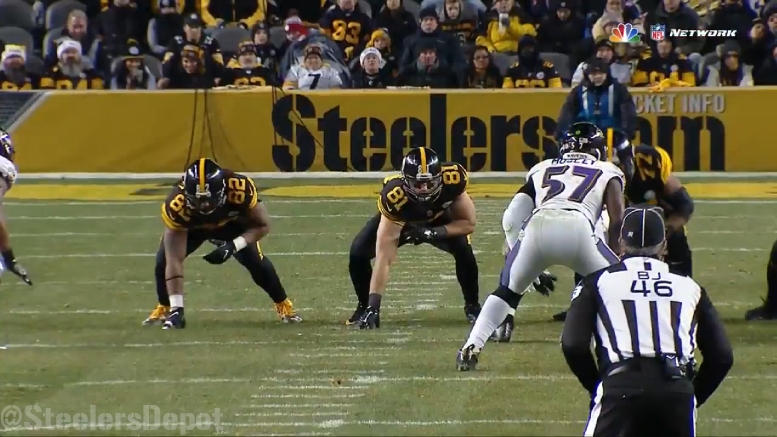 Jesse James: Until we know more about the future of Ladarius Green—which should be in about a week’s time when players report for the first phase of the offseason program—Jesse James has to be figured as the de facto TE1. That’s not exactly going to keep defensive coordinators up at night, but the good news is that he is improving, both as a pass catcher and as a blocker. He credited slimming down over the season as an aide. Perhaps his biggest area of improvement is working on yards after the catch, particularly in fighting through contact.

Ladarius Green: This is one of the biggest questions for the Steelers of the offseason, without question: will they have Ladarius Green, and what will they get out of him? He led the league in yards per route run a year ago from a limited sample size, so he has displayed his ability to be dangerous, but health has long been an issue, and his 2016 season ended due to a concussion, which is troubling.

David Johnson: The Steelers gave David Johnson a two-year contract on the opening day of free agency, and they only waited because they had to since he was on a qualifying contract a year ago and only an additional qualifying contract could be reached for such players prior to free agency. He is their best blocker and is more mobile than many believe, adding versatility and the occasional reception to his repertoire.

Xavier Grimble: The Steelers liked Xavier Grimble enough to keep him around all year even though they had three other tight ends plus a fullback for a good stretch. He has shown flashes as both a blocker and a receiver. An increase in consistency will be the key for him to stick around.

Ryan Malleck: An undrafted rookie last year signed by the Giants, his season ended with a neck injury and he reached an injury settlement. The Steelers signed him to a futures deal in February, but it should go without saying that he is a longshot, even if he has some talent.

Notes and Draft Outlook: Green’s future plays a tremendous role in whether or not the tight end position in a draft need. If they knew that they could count on him to be the player that they signed him to be, they could safely avoid the position.

But they are obviously not taking his availability for granted based on their interest in the tight end class, which is a pretty strong one, especially in terms of athleticism. While the draft will have a heavy defensive flavor, no offensive position short of an RB2 is more likely to be addressed than tight end.