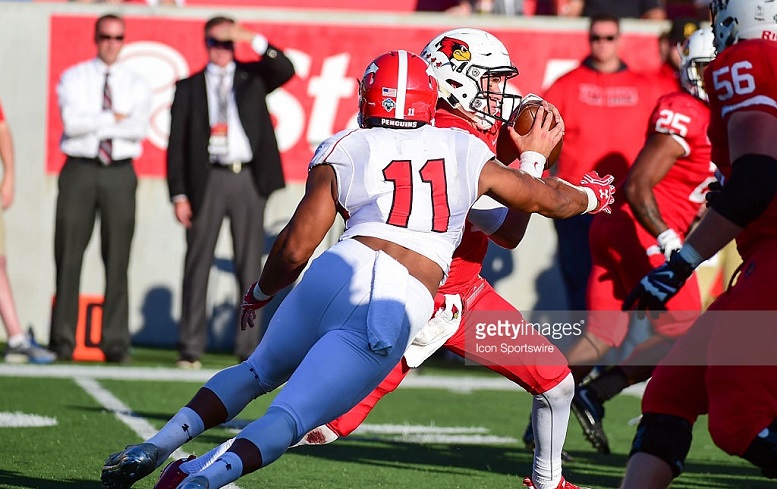 “The analytics guy that develops a will index, they are on the cutting edge.” – Mike Tomlin.

No matter how much Pittsburgh Steelers’ coach Mike Tomlin may not like to admit it, analytics are very much the cutting edge of sports. It would be foolish to believe that Tomlin and his staff do not invest in analytical data. Football, like any other sport is about being one step ahead of your competition, and any advantage, whether it be physical or analytical will be utilized.

Tomlin may have casted a cloud of secrecy over his research into finding a “will index”, but perhaps with some research of my own, I can find a way to navigate through it. Particularly, my attention will be towards finding a possible tool in which the Steelers use to judge pass rushing prospects.

Some words that come to mind when thinking of a typical Steelers pass rusher are physical, violent and disruptive. The latter word is perhaps the most significant as in the age of fast moving offenses, a disruptive pass rusher can be the difference between a win or a loss. Finding out how many disruptive plays a game a pass rusher is responsible for could be the key in identifying how pass rushers are evaluated. Combining a player’s tackles for a loss, sacks, interceptions and forced fumbles and then dividing it by the total number of games played leaves me with a number of disruptive plays per game the player has caused.

Below are the disruptive plays per game caused by pass rushers drafted between rounds 1-3 by the Tomlin’s Steelers. For a better picture, I’ve included the disruptive plays/game number for the player’s final year, second last year and an average between those seasons. This should help cast a better framework for consistency. 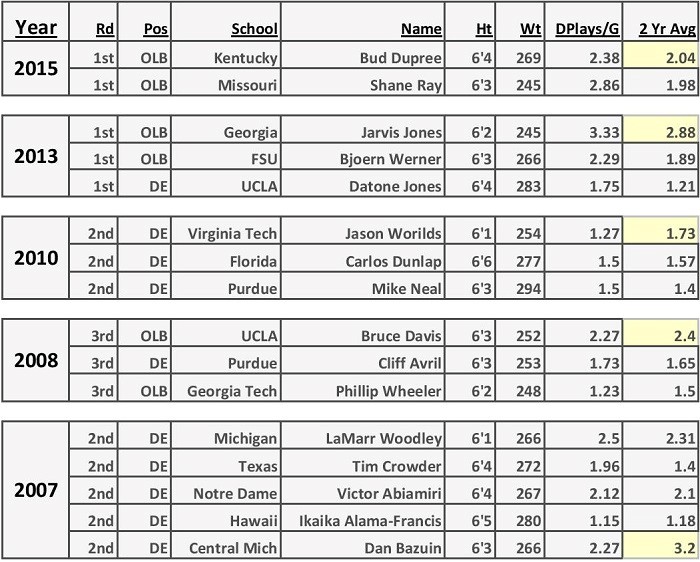 When looking back and asking “Why Bud Dupree over Shane Ray?” or “Why Jason Worilds over Carlos Dunlap?” or the one that hurts the most “Why Bruce Davis over Cliff Avril?”, the disruptive index helps fill in the answer. The only exception to that is Central Michigan’s Dan Buzuin as his numbers exceed that of LaMarr Woodley. Though I would not expect the Steelers’ regret this decision too severely as Buzuin failed to play a single regular season game in the NFL.

Taking the data one step further, I’ll insert the formula’s calculations into five pass rushing prospects from this year’s draft who have been linked to the Steelers’ – Carl Lawson, Tim Williams, Takkarist McKinley, T.J. Watt and Derek Rivers. Like the other pass rushers, I’ve included the disruptive plays per game number from their final collegiate year and their average over their final two seasons.

Much like majority of this year’s first round class, the results are cloudy. Rivers comes out on top but faced little competition. With Williams confined to a situational role, Lawson limited by injuries and Watt limited by inexperience, Rivers had little threat to his crown.

Could these factors mean the Steelers will select Rivers if he is available? According to the Disruptive Play data, there is a good chance of it. If Rivers is the pick as predicted, there is still no formula available to determine if his success can translate over to the NFL. If only we could find that will index formula.