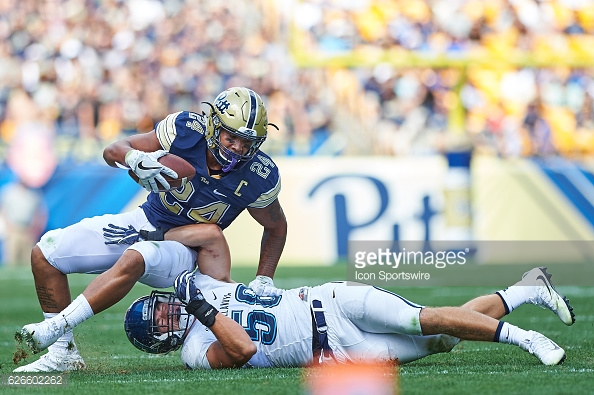 “What he does as a football player is what we want”, he went on to say shortly after that. And what he does is not exactly the same sort of things that many of the other running backs in the vicinity of his selections would have offered the Steelers, even leaving aside all the obvious connections between him and Pittsburgh.

The running backs were beginning to fall in the third round, with Alvin Kamara going early and then Kareem Hunt and D’Onta Foreman later, so it wouldn’t surprise me at all if the Steelers were under the impression that they would not have the opportunity to take Conner by the time their fourth-round selection rolled along.

It can be debated—and many are willing—on whether or not they should have taken a different running back if they were compelled to take one at that spot. Still on the board heading into the final day of the draft are the likes of Samaje Perine, Marlon Mack, Wayne Gallman, and Donnel Pumphrey. But who among them offers the same style as Conner, a “Steelers type”?

As Alex Kozora has pointed out, the Steelers do have a type if you go back and look through to Le’Veon Bell, Jonathan Dwyer and back to Rashard Mendenhall, all of whom were bigger backs, yet with some variety among them.

When asked how Conner will come in and complement Bell, Saxon described the rookie as “a different kind of guy, a smart football player. Tough, physical. The guy’s got great stature. It’s something that’s going to pay dividends as we go down the road”.

“He runs the football downhill”, he reiterated. “He can bend. Obviously, he can catch the football. He’s tough, he’s smart, and he’s going to be a guy that’s going to want to come in here and learn every day”.

“The rounds go the way they are”, Saxon said, “and then there’s guys that have been standing there when you get an opportunity to choose them, and he was in that position”, which obviously paints the picture of a team who feels comfortable with where they took a player in the draft.

The Steelers liked Conner for a specific role on this team who will complement Bell, though it will be interesting to see just how big of a role he may ultimately be given, especially in light of Bell’s injuries. The team likely also believes that he can put down better tape today than he did last year considering the residual effects of his cancer battle.

Draft value can be debated, but the ultimate question that the Steelers will have to live with is whether or not that role that Conner will serve is worth the resource that they utilized in order to acquire him. Right now, they are obviously content in their belief that it will be well worth it.