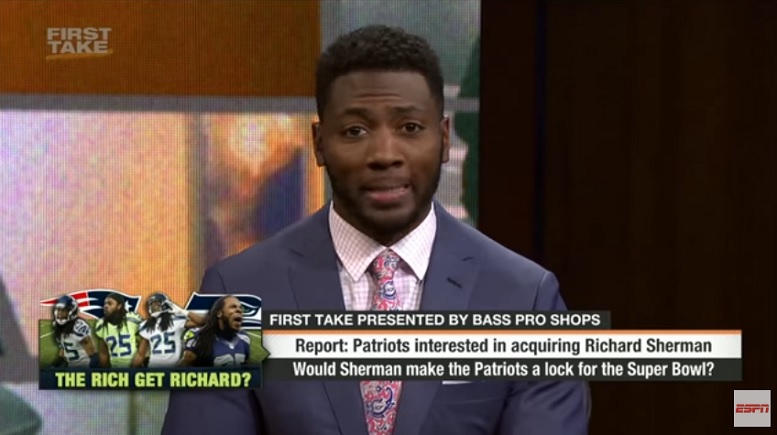 Former Pittsburgh Steelers safety Ryan Clark has made a nice transition to NFL analyst since retiring a few years ago, and that’s not overly surprising being as he was never afraid to speak his mind to the media when he was a player. With so much buzz lately surrounding the Seattle Seahawks potentially willing to trade cornerback Richard Sherman, Clark said during a recent episode of ‘First Take” that he will leave ESPN should the New England Patriots acquire the defensive back.

“If he [Sherman] goes to the Patriots, I’m letting you know now it’s the last day I’ll work for ESPN, because I’m tired of this and I can’t take it no more. And if they get another good player, I’m done,” Clark said.

Clark is obviously referring to the Patriots busy 2017 offseason that has included them trading for wide receiver Brandin Cooks, defensive end Kony Ealy and tight end Dwayne Allen. If that’s not enough, the Patriots also signed several key outside free agents since the start of the league year in cornerback Stephon Gilmore, running back Rex Burkhead and defensive tackle Lawrence Guy. Oh, and they re-signed a few of their own key free agents in linebacker Dont’a Hightower, safety Duron Harmon, defensive tackle Alan Branch and running back Brandon Bolden.

While there’s still an outside chance the Patriots could lose restricted free agent Malcomb Butler in the coming weeks either via an offer sheet or a trade, they might decide to ultimately replace him by acquiring Sherman. With that said, Sherman is scheduled to earn $11.431 million in 2017 and that would also be his salary cap number baring the Patriots extending his contract, which is set to expire after the 2018 season.

Even if another team signs Butler to an offer sheet, the Patriots could probably easily match it and depending on the structure of the contract, one can easily speculate his 2017 salary cap charge would be much lower than Sherman’s. Additionally, Butler is two years younger than Sherman.

While I don’t belive Sherman will ultimately be traded to the Patriots, it’s certainly possible and especially if Butler winds up elsewhere. Would Clark really quit his job if Sherman does land with the Patriots? I doubt it, but if such a trade transpires and he doesn’t, you can bet he’ll be reminded several times about his recent proclamation.