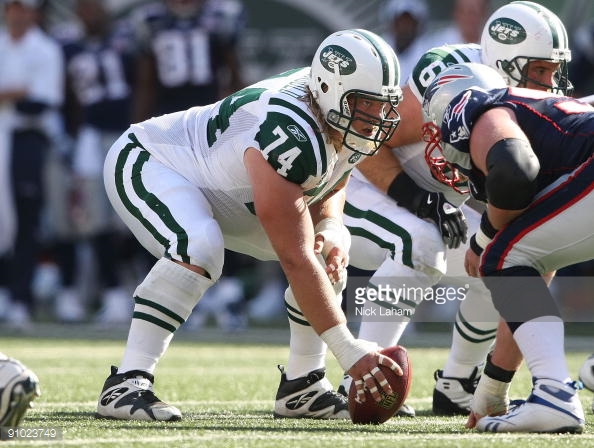 Earlier this offseason, the Baltimore Ravens traded starting center Jeremy Zuttah and a sixth-round draft pick to the 49ers in exchange for their sixth-round draft pick, which is near the top of the round. The Ravens were reportedly going to release him anyway, so they got something out of it.

But it still left them with a hole in their starting lineup with no obviously desirable in-house candidates to serve as the replacement—after all, had that been the case they likely would have already been starting over Zuttah, who while competent, was not performing to his pay grade.

Now, several weeks later, Baltimore is looking to address one of their self-inflicted holes in their roster by scheduling a visit with free agent former All-Pro center Nick Mangold. Fitting the profile of a Ravens target, Mangold was released by the Jets earlier this offseason, and thus would not factor into their compensatory pick formula, although they have already signed some notable free agents.

While the news of Mangold’s visit is new, the idea that the Ravens would entertain him certainly is not. In fact, it was a widely speculated course of action based on the team’s history of operations. They have made liberal use of the street free agent loophole over the years, and Mangold is a pretty serious name on the market at a position of need.

Of course, there will likely be a point at which Mangold is indeed more a name than anything else. The former first-round pick turned 33 in January, and he missed half of the season last year for the Jets due to an ankle injury. Prior to last season, however, he had only missed four games over 10 seasons.

The center has gone to the Pro Bowl seven times and was named a first- or second-team All-Pro for three seasons between 2009 and 2011. There appear to be mixed opinions over whether or not his play is indeed declining, and I will confess that I didn’t watch too much Jets football a year ago.

Still, he offers at least the potential for an upgrade over Zuttah for the Ravens during the 2017 season, although at his age it is unclear how many years he might have left, should he ultimately end up signing with Baltimore.

And even if all of that works out for the Ravens, they will still have a hole at right tackle to address, unless they mistakenly consider James Hurst and his ilk a valid option. They may have to find an answer in the draft and go with a very young offensive line in three spots.