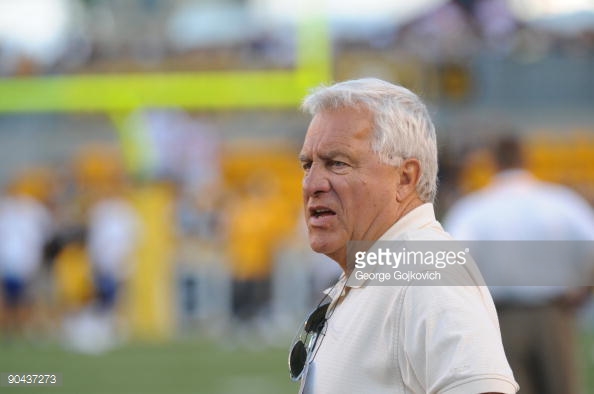 For as much grief as the Pittsburgh Steelers extended family has gone through over the course of the past several days following the passing of Chairman Dan Rooney, I would be remiss to let it pass without comment that Pittsburgh also lost another notable figure in its history two days before Rooney’s passing.

Tom Modrak, a Pittsburgh native, climbed the professional ranks of the National Football League from the building block of his work with the Steelers as a scout who was integral to the team’s affairs for most of the period between the 1970s and the 1990s before he became the general manager of the Eagles in 1998.

He initially worked with the BLESTO scouting organization, of which the Steelers were a foundational team, under Steelers Hall of Fame cornerback Jack Butler, and the team would officially sign him to work directly for them as a scout in 1978. He remained in that role for about two decades.

Courtesy of Ed Bouchette from the Pittsburgh Post-Gazette, Art Rooney II issued a statement in tribute to Modrak, calling him “an integral part of our personnel team for more than 20 years”. Following his time with the Eagles, and then the Bills, he rejoined BLESTO in recent years, and as Rooney said, “continued to make important contributions”.

“He helped the Steelers organization in many different ways throughout his career”, he continued, “all of which are greatly appreciated”.

Bouchette writes that Modrak was originally hired by the Steelers initially by Art Rooney, Jr., the son of The Chief and Dan Rooney’s brother. According to the article, he worked “part-time to review film of NFL players in the summer in the early 1970s before he joined BLESTO as a scout”.

Art Rooney, Jr. spoke to Bouchette about Modrak, calling him “very dependable” and “never a BS-er”. He said that “one of the most dangerous scouts you can get is a guy who doesn’t know poo but can write well and knows vocabulary. Tom was legitimate in everything. On top of it all, he was a very nice and loyal person”.

Modrak was an influential figure to those that he worked with in Pittsburgh and elsewhere, able to not only excel at his own profession but to help others do so as well. He was responsible for helping bring in Andy Reid to Philadelphian and drafting Donovan McNabb, although Reid’s bid to secure general manager powers for himself saw Modrak relieved of his duties before he could taste the eventual fruit of his labors.

He passed away on April 11 following a months-long struggle with a rare neurological disease at the age of 74. Modrak helped shape the Steelers’ roster for decades, and had a hand in shaping the rosters of the Eagles and the Bills. He continued late in life to scout college players through BLESTO. The Pittsburgh native is a member of the Western Pennsylvania Hall of Fame, a fact of which he was very proud.