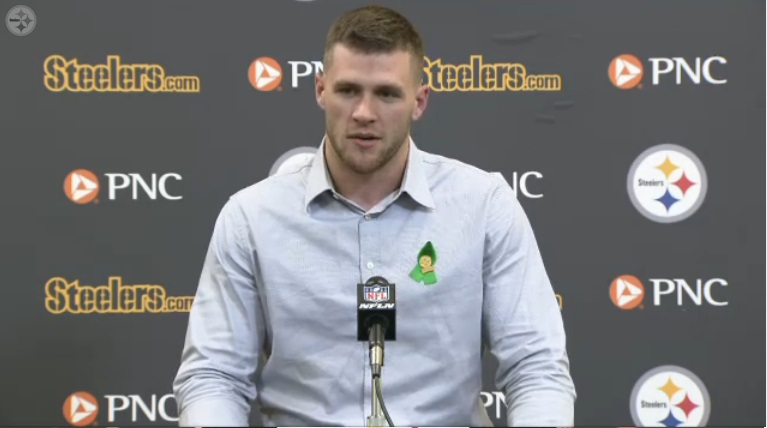 New Pittsburgh Steelers outside linebacker T.J. Watt has already overcome quite a bit of adversity during his path to the NFL as the Wisconsin product has had to fight back from injuries to both of his knees. During his Friday introductory press conference, Watt, who was chosen 30th overall in the first round of the 2017 NFL Draft by the Steelers Thursday night, was asked what it was like to have to overcome those two knee injuries.

“I knew after I had them both, I knew it was susceptible to happen again if I didn’t have the surgery,” Watt said. “I just think it was the way I was born, just the way my knees are. But thankfully, Dr. Lowe was able to fix my knees up and they’ve been fine.”

Watt, who was initially recruited by Wisconsin to play tight end, was ultimately redshirted as a freshman. In August of 2014 he injured his right knee and missed the entire season. After he was back healthy again, Watt injured his left knee early in the spring of 2015, but he did manage to play in all 13 games that year.

On Friday, Watt was asked if he ever wondered that football wasn’t for him after having to deal with two knee injuries early in his college career.

“No,” Watt said initially. “I think maybe it might have crept into the back of my mind after the second injury, but I truly don’t think so. This is what I was born to do and I’ve believed that since a really, really young age. And I’m to this point now and I can’t wait to keep going.”

Watt also talked about what he learned from having to overcome adversity.

“I’d say once I had my second knee injury it was probably when I decided to take football really seriously,” Watt said. “I’ve been treating myself as a professional athlete in college, I like to say, because I finally realize how important the game is to me because it’s been taken away twice. And I truly love the process of football. I’m not just a gamer. I love practice, I love working out, I love all the little details of football and I think being injured and sitting out for an extended period of time really taught me the values.”

With knee injuries and his college career now behind him, Watt said he’s looking forward to getting on the field with the Steelers.

“Yeah, its great to be here but I’m not satisfied at all to just be here,” Watt said. “I’m chasing greatness and that’s what I’m here for.”