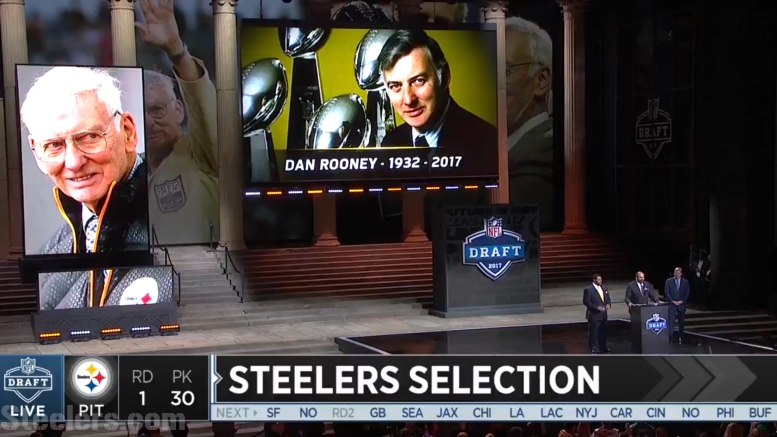 I don’t know if this was already prior knowledge, and perhaps I just missed it, but I really wasn’t expecting to see what I saw up on stage when it finally came time to announce the Pittsburgh Steelers’ selection in the first round, which literally had come in more than 15 minutes before it was actually finally named.

In case you didn’t see it yourself, I’m referring to the fact that the NFL paid homage to Steelers owner and chairman Dan Rooney, who passed away exactly two weeks prior to the opening day of the draft at the age of 84—born one year before the franchise even existed, this is literally the first decision that has been made without him.

The tribute began with Commissioner Roger Goodell speaking about Rooney’s impact on the game and on himself, but he was flanked with two men who knew him well, and played hard for him. Two Hall of Fame running backs, and Super Bowl champions. Franco Harris, and Jerome Bettis.

The crowd was very accommodating as the speakers went on, which I thought was a very nice moment, and to be honest, by the end of it, I had almost forgotten that the Steelers were about to announce their selection—which I had turned off Twitter to see live with surprise.

“Two weeks ago, we lost one of the most beloved members of our NFL family, Ambassador Dan Rooney”, the commissioner began. “A true [and literal] Hall of Famer, Dan embodies everything that is special about this game. He was a great leader for the Pittsburgh community, a tireless advocate for the Steelers. But more than that, he was one of the best men I’ve ever known”.

Goodell turned the microphone over the Harris, who talked about his love of the three pillars of his life: faith, family, and football. “He was so approachable, respectful”, he said. “He was good to the city of Pittsburgh” and “touched many lives”. While “he will be missed”, he concluded, “his spirit will live on”.

Then came Bettis’ turn, who has developed into a natural speaker in his post-retirement career in the media. “Mr. Rooney was great owner, but he was even a better person”, he began. “He got an opportunity to know each and every one of his players, not as the player, but as the man”.

The Bus relayed the uneven relationship he had with Rooney regarding ‘thank yous’. “He would always thank me for everything that I had done for the organization, all the while I was trying to thank him. He would never, ever let me thank him because he felt it was about what he did for his organization more than about what he did for me personally and my family”, he said. “So at this time I just want to say, thanks Dan, I appreciate it. We’ll miss you”.

The whole moment, I confess, caught me a bit off-guard and nearly took me out of the draft for those brief few minutes, but I thought it was fitting and appreciated that the NFL took the time out on such a large stage to pay its due respects for a true legend of the league.