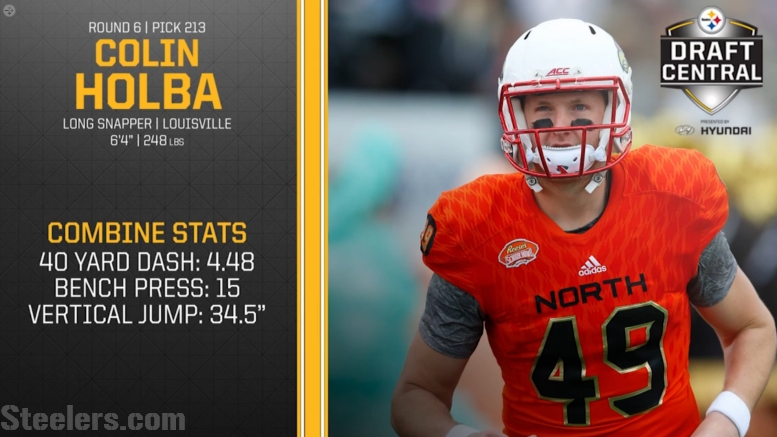 One thing I can tell you about this offseason for the Pittsburgh Steelers is that it’s going to be a little weirder than usual. And one of the reasons for that is that we’re going to be taking the long snapper talk up a notch because the Steelers pulled a Bill Belichick and dun gone and drafted one.

A couple weeks back in my pre-draft roster review for the specialists, I wrote that “it is not very frequent that a team uses many draft picks on kickers, punters, and long snappers”, noting that they did once take a punter in the fourth round, but that “I certainly wouldn’t expect that again”.

In another article, somewhere, which I can’t seem to find, however, I did note that it’s no longer considered absurd to draft a long snapper. As I alluded to earlier, it was only a couple of years ago that Belichick took one in the fifth round.

Now that we have the foreshadowing out of the way, it’s time to take a look at the logic of this signing, such that it is. As we have already talked about, the Steelers and the scouts of other teams around the league do think that Colin Holba is going to be a really good one, and is one of the best long snapper prospects in recent years, such that that is worth anything.

And Greg Warren is going to be 36 years old this year, with a pair of torn ACLs in his background. While there were no indications of it during the season, it’s possible that the Steelers are concerned that he might not be able to play, or something in that vein.

Following the draft, General Manager Kevin Colbert did refer to Holba as “competition” for Warren, which is really nothing that they have ever talked about before—of course they’ve never drafted a long snapper since he’s been here, either. He said that when asked if Warren was healthy, which wasn’t exactly a direct answer.

Talking about bringing in competition, however, doesn’t exactly sound like Warren won’t be able to play, but I wouldn’t be surprised if we hear something more on this matter in the near future, whether through the team or through some sort of leak.

After all, it’s not often that a team drafts a long snapper in the sixth round. But here’s why the Steelers did it, considering the fact that they wanted to take a long snapper. Logically, you would probably think that a team looking for a long snapper is looking to do it with their last pick in the draft. That’s usually in the seventh round, but Pittsburgh wasn’t picking until late in the round.

So that means, I don’t know the exact number, but I would guess somewhere between 25 and 28 teams would be using their last pick between the Steelers’ sixth and seventh. If any of them were planning on taking a long snapper, Holba would have been gone.

The Steelers are a team that especially values not only quality play, but stability from the long snapper position. They don’t want to have to worry about it for a decade. That’s what they got from Warren, and that’s what they’re hoping that they can get from Holba.

I’m not going to pretend that I know a great deal about the mechanics of long snapping and what separates the good ones from the bad, other than to say that you know you’re watching a draftable one after you watch one that isn’t. And I’m not going to pretend that I’m in love with the selection. But this is the rationale behind taking him, and taking him when they did.